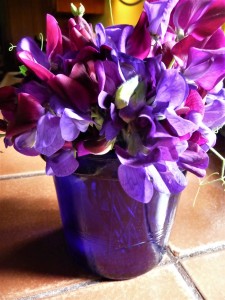 The kitchen was fragrant with dill and scallions. We were making varenyky, based on recipes from Olia Hercules’s wonderful Mamushka, but adapted to what we had available to us. We had dry curd cheese and cream cheese, potatoes, thick-cut bacon, and frozen sweet dark cherries. We had savoy cabbage to braise for a side dish, and beets with their tops. Manon and I stuffed the dough and pinched the triangles closed, 8 cookie sheets of them, and those rested for a few hours on top of the freezer while the beets were roasted for salad, and the cabbage cut into thin slivers with apples and shallots. John set the table outside, under the grapes and wisteria, and there were bottles of Bricker cider, Prosecco chilled in the cooler, and a gooseberry galette for dessert.

I grew up with aunts and a grandmother who made delicious pedaha–what we called pierogi. My grandmother made fresh cheese to stuff them with and she also used sweet golden plums for a dessert version. We ate this food when we visited Edmonton in summer. I remember lying in grass and hearing the women make the pedaha together in the kitchen, windows open for any breeze that might find its way into the hot room. In my kitchen with Manon, with the sound of the little boys making a mural of our patio with sidewalk chalk, I knew what the women must have felt in those days: a sense of familial history. They were doing what they’d been taught to do, anticipating appetites and the prospect of long meals on summer evenings with far-flung family returned for a visit.

In Ukraine last September, I kept seeing versions of families that might have been my own. I even met some members of the family that stayed in Ivankivtsi. And I knew that those who were eating under vines as we passed their farm on our way to our hotel above Kosiv were remembered by others living elsewhere.  We could be them. We are sometimes the couple with the apple basket, sometimes the children asking to return. Sometimes we are all together at a table and the food we eat is the food I dreamed about as a child, dreamed of its creation. Driving from B.C. to Edmonton, I could already smell the dill and the sharp onions being sliced in the capable hands of the women.

At each farm, someone is picking apples, by ladder, by filling a bucket with windfalls. A man, a woman with a child, a couple, with a basket between them. Stooks stand in the fields. Horses graze, dogs sleep as though dead in the dry grass. There are pumpkins still in the gardens, heaps of watermelons, horseradish leaves lush by the houses. At the farm where we turn to climb the road to Sokilske, an old table is balanced under a pear tree and a family is seated around it. The man raises his glass. A horse lifts its head as our wheels spin briefly, gaining traction for the steep rise. We can almost smell the Cheremosh River. And listen—there are chickadees in the sunflowers. Chickens scatter at the side of the road.

–from “Museum of the Multitude Village”, an essay from an unpublished collection.