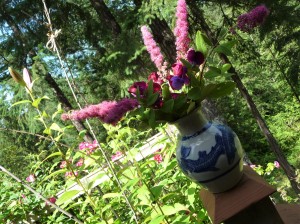 It was after midnight and I woke up, hearing owls. I think the young barred owls are out in the world now, guided through the darkness by their parents. I heard a tentative call, then a loud firm one. Back and forth. I came down to my desk to see if I might be able to finish the essay I began just at the beginning of the pandemic that has changed our world and our lives. The other day I wrote about how I laid out the draft of what I had written thus far, to see the pattern, to adjust the sequence, to try to figure out where the gaps were and how to fill them. Yesterday as I swam I knew that I had the last five or six pages mixed up. The material was there but it didn’t work as I’d arranged those passages. I swam in the water lit by morning sun and it was as though I was alight too. I swam and I thought and when I came out and wrapped a towel around myself, I knew how to fix some of the troublesome areas. I worked on it on and off yesterday while I tidied and readied rooms for some of my family arriving later in the week. But something was still not quite right. This essay is truly an attempt, a weighing, a nod to the proto-Indo-European root of the Latin exigere “drive out; require, exact; examine, try, test,”, anyway, the root ag, which means “to drive, draw out or forth, move”. I examined, that’s for sure. Old documents, photographs, death certificates, cemetery records. And I needed to find a form for what I was examining, drawing out, moving forth. I have three kinds of sections: those following my progress in figuring out some historical information about my grandparents, in particular my grandmother’s experience of the 1918 Spanish flu pandemic, those are justified to the left margins of the page. They are also geographically set on the south bank of the Red Deer River. The passages that detail some groundwork I did with my husband to find evidence of the homestead on the north bank of the river where my grandmother moved after the pandemic (or maybe even during) are justified to the right margins of the page; and the hinged doors of the essay, the openings and closings, are centered on the page. My hope is for a sinuous movement between the pages, not just a little trick to make reading difficult. So maybe I should think of this as a compostion rather than an essay?

Late 14c., composicioun, “action of combining,” also “manner in which a thing is composed,” from Old French composicion (13c., Modern French composition) “composition, make-up, literary work, agreement, settlement,” and directly from Latin compositionem (nominative compositio) “a putting together, connecting, arranging,” noun of action from past participle stem of componere “to put together, to collect a whole from several parts,” from com “with, together” + ponere “to place” (past participle positus).

I like that. I’m reminding of the small device in our printshop John uses to set type: the composing stick. Or musical composition, combining elements and phrases and parts of music to make something whole. Or, or, or.

In the night I realized how to rearrange the last few pages and by 2:30 a.m. I was finished. I went back to bed with such gratitude. To have been able to work most days on writing that helped me to understand how people survived hardship and loss, my people, gave me perspective on the daily news of infection rates and spread. Sometimes the world tilts. It does. There are terrible results, ones you can’t stop thinking about. So you think about them and write them down, passage by passage, finding your way through the night as owls do, calling out, listening. It’s a kind of music, composed of scraps and yearning. It’s 8000 words that I couldn’t have imagined in early March, laid out, margin to margin, river bank to river bank, a little door opening into the dark.

2 thoughts on “Sometimes the world tilts.”