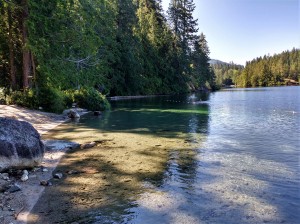 The clear waters of the Wei flow eastwards, and Chien-ko is far away: between the one who has gone and the one who remains no communication is possible.
It is human to have feelings and shed tears for such things; but the grasses and flowers of the lakeside go on for ever, unmoved.

—Du Fu, “By the Lake”, prose translation by David Hawkes

Swimming this morning, I wondered, where does the word “lake” come from? I was stroking my way the length of the beach, adding on about 100 meters today because I didn’t want to get out. I was deep in the green water of the lake I’ve been swimming in for 40 years and it never occurred to me before today to wonder at the etymology of lake.

I wondered about origins, how a lake comes into being. I think the lake I swim in is the result of glacial processes. A creek from the lake drains into another nearby lake and it was once a fjord, now separated from the Strait of Georgia by an emerged sill. We were always told by old-timers that our lake is salt at its deepest levels. Ancient rock paintings on the other lake list crayfish, salmon, and other fish and there are coho runs into various creeks. The lake I swim in is home to a fall-spawning race of cutthroat trout—my older son once conducted a census of the trout as part of a science project. We spent many hours on the bridge across the creek, watching for fish in the chilly water.

This morning, swimming, I was filled with nostalgia for summers past, summers gone, and all the times we piled into the car with towels, buckets, masks, flippers, the dog, bamboo mats to lie on, baskets of snacks, cold beer, nets for catching (and releasing) tiny fish, and various inflatable toys (that never kept their air).

Where does the word “lake” hold? It is one of the most summery words. It carries the promise of cool water, ducks, swallows dipping over the surface, the sound of children racing to its shallows, the scent of drying bodies, sand between toes, the way the sky looks as you swim on your back, the cedars filtering sunlight with their generous branches. …but the grasses and flowers of the lakeside go on for ever, unmoved. 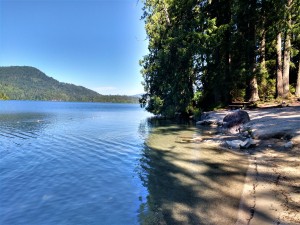