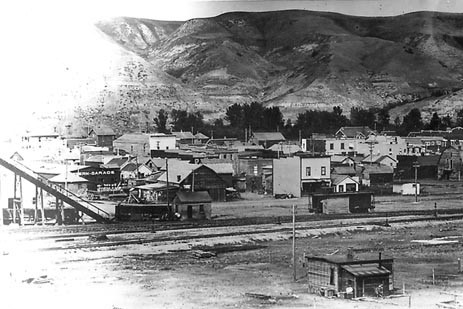 This morning I’m in Drumheller in 1918. Really? Actually I’m at my desk on the Sechelt Peninsula reading old newspapers and other documents as I trace my family’s small history in the badlands of Alberta in the early years of the 20th century. But reading the newspapers of October, 1918 is haunting. The small city was experiencing the ravages of the Spanish flu pandemic and I’ve gone through lists of the dead. Many men in their 30s and 40, miners, including my grandmother’s first husband and her brother, whose lungs were no doubt already compromised. Some children. I was surprised at the designation “Coloured” for some of the victims. Then I remembered ads in the papers for hotels claiming “All white help employed.” The sick were cared for in the school, the morgue was in the Miner’s Hall.

When I look at this photograph, taken in 1920, I have questions. There was a squatters’ camp from at least 1912 until spring of 1918, on the west side of town. After the pandemic, the modern one, I’ll be able to look at a map of the survey done to divide the camp into lots to sell at auction in November, 1917. My grandmother lived in the camp, as did her brother. I’ve recently learned that the reason they didn’t buy the lots where their houses were located is this:

Any person who was not, at the commencement of the present war, and who has not since continued to be a British subject, or a subject or a citizen of a country which is an ally of his Majesty in the present war, or a subject of a neutral country, is prohibited from purchasing any of of these lands under penalty of having the sales cancelled and the payments made thereon forfeited.

Squatters were given until June of 1918 to move their houses and other buildings. As late as 1925 there were complaints of “eye sores” still on the unsold lots. After her first husband died, followed by her brother, and the child she gave birth to in July, 1917, my grandmother married my grandfather in 1919. They were living on the other side of the river, in the shadow of the hills you can see in the photograph, in 1921.

I’ve written about this before. I wrote a long essay after a trip to Drumheller last April. But it was messy and didn’t manage to do what I’d hoped it would do. I’ve taken it apart and am stitching something new, something straddling the river like a bridge. I read old newspapers on my screen, I look at the photographs, and I try to find the small door that will open into the lives of people so far away in history but present in my own body.