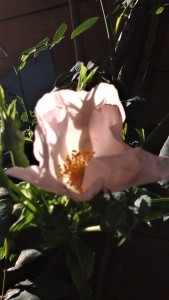 It’s almost the end of May. I think of how nearly 3 months have passed since we learned that there were new risks to simply being alive. 3 months in which we’ve left home mostly just once a week, to shop for food; 3 months of long quiet days and quieter nights. I know there’s been a shift because there’s more ferry traffic and more boat noise down on Sakinaw Lake. It rises up to our house through the open windows. This evening I heard drumming down near Ruby Lake. The resort there has a amphitheatre where they stage events and I guess there’s something going on. People can’t seem to come to places like these lakes and beautiful forests without bringing their noise and their various toys. Jet skis and big hollow drums are the inevitable sounds of summer people.

This time has passed quickly. How the days are filled with things to do, even if they seem mundane. Meals have taken on a particular importance. I think about dinners with more care than usual, hoping to make them festive for the two of us. I bake bread, special cakes, like the lemon one with lemon and lavender butter cream that was so delicious I sent John down to the neighbours’ gate with half of it for them to enjoy. We’ve eaten fat organic chickens roasted with rosemary, fillets of sockeye salmon flecked with fresh dill, bowls of beets on their greens served with sour cream dense with fresh herbs—chives, parsley, dill, and lovage—, duck legs roasted with smoky paprika until the skin was deep mahogany, and lovely little potatoes (not ours, not yet, though they’re coming) with dollops of thick yoghourt and zaatar.

While I sit at my desk lit only by the small lamp, there are protests in major US cities. Sometimes it seems the world as we’ve known it is going up in flames and to be honest, some of it deserves to. This pandemic has served to focus attention on the inequalities inherent in North American culture. In Canada we’re doing better but we’re not perfect. The legacy of damage done to Indigenous communities is broad and ugly. Sometimes a crisis nudges us in the right direction even if we never quite get there. But reading about the protests in Atlanta and Minneapolis and Oakland, among others, brings home (literally, in my quiet room, while John sleeps and a loon calls down on the lake) how fractured the justice system is that allows a black reporter to be arrested as he covers the events before a police officer, with a history of violence against black men, is charged with the murder of a man he held to the ground by kneeling on his throat until the man died, calling that he couldn’t breathe.

This morning we swam, our 3rd day in a row. The lake was cool but once I began to find my place in the water, my rhythm in its gentle movement, it was as though I’d never stopped. As though the winter never happened, my slow kilometers in the local pool, driving home with hair smelling faintly of chlorine even after a shower. A couple of young families were also there, the children so eager to be in the water, and I realized how difficult it’s been for everyone to navigate this new map we are trying to learn. My grandchildren call and we read books over WhatsApp but I bet they’d much rather race around the parks near their homes with other kids. Two of them told me very seriously that they couldn’t go to school because of The Virus. (Kindergarten and pre-school…) John remembers being kept home from school the first year his family spent in Calgary after emigrating from England—he would have been 6—because of the polio epidemic. He remembers trucks spraying the lanes in his neighbourhood because it wasn’t yet understood how the virus spread. I’m a little younger. I remember being 6 and given a sugar cube soaked with pink vaccine in a church basement where my mother had walked my younger brother and me to a temporary clinic for our first experience of needles. We were luckier than a friend of my older brother who had polio and who never quite recovered.

So there’ve always been perils to being alive. But none have felt quite like this. The immediate isolation because of COVID19 and the police cars in flames in major American cities while a president rages against perceived slights. We do what we can. It’s not enough. But at this moment in history, what is? I don’t ask that frivolously. I truly want to know.

Earlier this evening, I was lying in my bed reading the last section of Francesca Wade’s wonderful Square Haunting. Virginia Woolf in Sussex is trying to find a way to write about her life. As German bombers fly overhead nightly on their way to London, she walks in her garden, plays bowls with Leonard, and is trying to keep herself from descending into the despair that we all know is inevitable and that will send her, pockets full of stones, into the River Ouse. I know this story but was reading it tonight as though for the first time. But I looked up from my book at one point because of the sweetest scent just drifting in through the curtains, sweet enough to take me from the pages where a city was in flames and people huddled in shelters in their nightclothes. I walked out onto the deck to bury my face in dog roses. In the heat of the day, they have almost no perfume but as the night cools down, oh, what beauty. I am writing something about the past myself and some days I am there, caught up in the years and experiences so deeply that I have to extract myself almost physically from my work in order to snip dill for the salmon or shape the bread. It’s how I am finding my way through the present. Once I surface, it’s like coming out of the lake from a swim, refreshed, but also a little bereft.

The past only comes back when the present runs so smoothly that it is like the sliding surface of a deep river. Then one sees through the surface to the depths. In those moments I find one of my greatest satisfactions, not that I am thinking of the past; but that it is then that I am living most fully in the present. For the present when backed by the past is a thousand times deeper…
— from “Moments of Being”

One day all of this will also be part of that deep river, something we remember vividly,

knowing how it changed us.

4 thoughts on “at night, thinking”