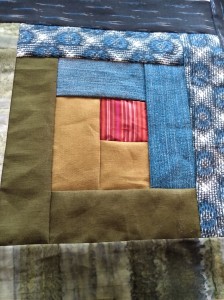 Sheltering in place is easier when the sun is shining. We spent the fine days outside, working in the garden, burning the piles of old branches and raked cones, etc. It wasn’t until the evening that I’d feel the spiral of anxiety taking me to its centre. What if, what if, what if.

And now it’s raining. I am working on a memoir with John, or at least I’m writing my part and he’s writing his; later we’ll figure out how to seam them together. There are a number of ways we could do it and we’ll have to decide later what we want to do, how we want the perspectives to work together, to diverge, to return, to echo. But sometimes I feel too distracted to work with ideas and memories. I want to do hand work.

In the meantime, there’s quilting. My friend A. helped me with the text design for my little chapbook made in honour of my 65th birthday. We were doing this back and forth, as she lives in the Netherlands. She was so helpful and so responsive that I asked her what colours she would choose for a textile. This is what she replied:

Colours…are you asking what I think you’re asking? Regardless, I’m a fan of deep reds (not burgundy, but redder, earthier) and what W. refers to as ‘non-colour’ greens. Olive, forest, greens that blend in. Dark blues too. Is that boring?

No, not boring at all. (And yes, I was asking what she thought I was asking.) Not boring, but a challenge. I have a trunk with fabric collected over the years, some of it remnants from other projects and some of it scraps hoarded for the right quilt. For years I made blue and yellow quilts and if I’m honest, those are still the colours I love best. And stars. I made several Variable Star quilts and then decided to do something else. So I made a plan and began to cut and (I’m not joking) the blocks turned into Variable Stars. It was as though my hands were guided in a direction I had no control over.

I’ve been thinking about what kind of design would work best for this quilt of non-colour greens and blues. And that red, not burgundy. I always have lots of blue but did I have the right blue? I hope so. I found a stash of scraps from Maiwa on Granville Island. I’d gone to buy indigo powder for a dyeing project and there was a bin of linen with bags alongside and a sign saying you could fill a bag for $10. A big bag, good quality linen, with several shades of what I’m hoping is non-colour green.

So writing a book about building a house and wondering what kind of quilt to make. Then it came to me. A log-cabin quilt. I’ve made three and I love the process of building the blocks, log-strip by log strip. It’s a pattern that is generally associated with post-Civil War American quilt-making but some textile scholars believe that the inspiration reaches back to the ancient Egyptians. When tombs were opened in the early 19th century, archaeologists were surprised to find mummified animals, companions to the dead, wrapped in intricately woven or pieced strips of linen. There are several ways of arranging the strips in log-cabin quilts so that resulting pattern might be a Barn Raising, Sunshine and Shadows, Courthouse Steps, or Straight Furrows. I made mine into what I think of as Gods Eyes, mostly because my skills are so careless that my blocks never come together nicely.  Here’s a section from a quilt I made 20 years ago for my parents’ 50th wedding anniversary; it’s now on my bed.

The red square in the centre of each block represents the hearth at the heart of the cabin, though there are versions with yellow squares for lighted windows, and black squares on quilts used as coded guides on the Underground Railroad. I’m using little scraps of duppioni silk for A’s quilt. More than 40 years ago I attended a quilt show at Kilkenny Castle in Ireland and saw beautiful examples of patchwork made with the most luxurious fabrics. But I lost my heart to the rough log cabin quilts, worked by poor women, made from flour sacks and remnants of work clothing. They were lopsided, with loose stitches and mismatched strips echoing examples their makers had seen in the big houses where they might have taken a chicken to sell or scrubbed floors for a few pence.

You build log by log, strip by strip. In the book you are writing, you remember nailing plywood for subfloors to joists set on beams. When the plywood was nailed down, when the walls were lifted and tied together at the corners, when the rafters were set on the top-plates of the walls, and then the strapping nailed on to the rafters and the shakes nailed on, course by course, when the cedar siding was nailed onto the exterior, you had a house that eventually became a home. One by one I’ll make these blocks, trying to keep the courses straight and true, a way to work my way through these days of rain and isolation. I’ll use earthy red for the sashing and maybe fasten each square with two-eyed shell buttons for vision. Fire at the heart, sturdy walls, from my home to hers.