I wrote this in November and who would have imagined that the Louvre would be closed, that lights have been dimmed over great areas of the planet, and that we live from day to day in time’s uncertain embrace. 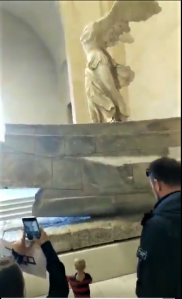 If you read this blog now and then, you  know that time is something I think about a fair bit. How we are shaped by it, how we conceive it, where it comes from, where it goes. We say it passes but it doesn’t. We are always in its flow, carried with it, through it. It doesn’t always feel like a continuum but it is. I think.

One of our sons is in Paris with his family for part of the autumn. He is working in what I think of as deep math. It’s a world that has held him since he was a small boy, walking down our driveway with his grandfather, telling him that numbers exist below zero. He was 3 or 4. I’ve tried to take the measure of that world—if you’ve read the title essay of Euclid’s Orchard, you will recognize my effort and where it took me—and I learned enough to know that I will never understand that part of my son’s life. But we do have things in common, beyond the obvious (I am his mother after all), and he is wonderful company.

Some mornings I wake to photos and short videos from Paris. It is evening there when I look at what my grandchildren did that morning. I am in the moment and they are asleep. I watch them ride carousels in the shadow of the Eiffel Tower and time stands as still as it can while children laugh and fly through the air in a small metal plane. I watch them race through the Louvre, eager to see everything. In the halls of great art, they are children from the new world. The winged Nike of Samothrace was a particular pleasure for them. Created circa 190 BCE, possibly to commemorate a sea battle, she stands on the prow of a ship of Lartos marble, her clothing of translucent Parian marble so airy that you half-expect to hear it swish. My grandchildren rush to the winged Nike and I watch them, 8000 kms away, earlier on the same day that they went to the Louvre with their mum, a life-time away, the sound of my granddaughter’s voice so clear. “That statue is like a lot of years old,” she says, as her brother stands at the base, his shirt on backwards.

I think of Guy Davenport’s beautiful poem for Marianne Moore, “At Marathon”, and its stunning conclusion:

Two thousand, four hundred and fifty-five
years ago. There are things one must not
leave undone, such as coming from Brooklyn
in one’s old age to salute the army
at Marathon. What are years?

Such as coming from Edmonton as children to race down to the Winged Victory of Samothrace. What is time?