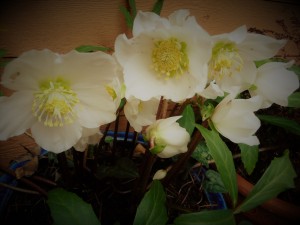 The hellebores are blooming by the front door. Sometimes on a grey day that’s all it takes to boost the spirits. Sometimes a little sleep would help too. For the past few nights I’ve had difficulty sleeping—last night I got up at midnight to spend a few hours at my desk and then went back to bed. I was still awake at 5. I feel as though I’m underwater, moving slowly, asking for everything to be repeated. But to be honest? I love to be up in the very small hours of the morning, just after midnight, when the house is so quiet you could hear a mouse. And sometimes it is a mouse, one brought in by Winter, scurrying around and trying to find a safe place. Last week a mouse huddled under a wooden box and I used a feather duster to brush it into a rubber boot. When I let it go on the upper deck, it raced to the grape vine and disappeared down its woody trunk, as though it knew exactly how to navigate the sides of our house. But no mouse last night. Utter quiet. I was trying to puzzle through some family connections and had a file folder, an actual paper one, on my desk. Just as we were leaving for Ukraine in September, in fact sitting in the ferry lineup at Langdale enroute to the airport, an email arrived on my tablet from the young woman who is my aunt Ann’s great-granddaughter. (Hello Amanda, if you’re reading this!) We share some relations but not all. Her great-grandmother was my father’s half-sister. My grandmother was Amanda’s great-great-grandmother. But Amanda is on the same quest as I am, finding out how people fit in our vast family tree and she’s been very helpful in locating documents. What arrived in September were some death certificates as well as a marriage certificate. And they weren’t what I expected. The story I’d always been told was that my grandmother’s 9th child, the last one born to her and her first husband, died of diphtheria, just 7 months after my grandmother’s husband died of Spanish flu. I’ve known that story and a few years ago I learned another sad part of it: my grandmother’s brother, who’d come to Drumheller just a month after she arrived in 1913, and whom my father never knew anything about and who isn’t remembered in the village he and my grandmother came from in what’s now the Czech Republic, died within days of my grandmother’s first husband. I learn from the forms sent by Amanda that my grandmother’s brother died in her home, a bare shack in a squatters’ community in Drumheller, and that he died of Spanish flu, yes, but also of blood poisoning. And that the baby, 10 months old at the time of her death, died not of diphtheria but of malnutrition and whooping cough. Malnutrition. I was shocked to read that but maybe I shouldn’t have been. A woman with 9 children, one an infant, loses her husband and her brother within a couple of days of one another, without much English, with no means of support, in a shack in a small town ravaged by a flu epidemic—how difficult it must have been to simply go on, let alone produce milk to keep an infant alive and strong. In later years, my grandmother had a cow but not then. So that infant died in May of 1919 and less than a year later, my grandmother re-married. Her new husband was the man who became my grandfather. They had a child in 1921, her 10th child, his first, and almost exactly 3 years later, that child died too. My father told me his sister had died of diphtheria but on the death certificate, the cause of death is “Septic tonsillitis”. Two years later, my father was born.

In the night when I was puzzling through these details, making a little drawing to figure out the time-frame of each event, I thought how sorrow must have been the abiding atmosphere in my grandmother’s house during those years. One death after another, two of them the frayed threads that connected her to the home she’d left in the Beskydy Mountains, the young husband she’d married in her early 20s and her brother, who lived in a dwelling dug into a bank of the Red Deer River, the third a thread of hope, a small life to care for and to survive for. Or maybe she simply couldn’t care for the baby, couldn’t rise from her bed, couldn’t nurse it. There were 8 other children in the shack. Probably not much food. I thought of Claudius, in Hamlet: Oh Gertrude, Gertrude, when sorrows come, they come not single spies, but in battalions.

Hellebores have their roots deep in folklore and the one growing by my front door is a Christmas rose, its name alluding to an old legend in which a young girl who had nothing to give to the Christ child wept; her tears fell onto snow and hellebores sprouted from them. They are lovely, yes, but also toxic.

4 thoughts on ““when sorrows come””