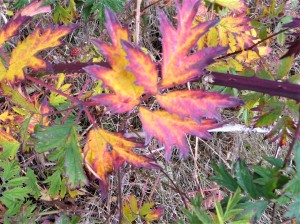 When we came blackberry picking in early September, we missed the berries on this low plant, Rubus laciniatus; its fruit ripens after the Himalayan blackberries of early to mid August. In the patch where we went with our buckets, we did pick a bucket of the cut-leaf blackberries. Walking yesterday, I saw a small bird (too quick for me to be more specific) darting in under these strong canes. Even though these are an introduced species, they feed birds, and they feed the bears who are lurking around, waiting for the salmon to enter the creeks. I see seeds in coyote scats up where we pick berries every year. I could have picked a handful yesterday, there were enough for that but I left them, regretting it afterwards. The wonderful American poet Galway Kinnell’s poem, “Blackberry Eating”, ends this way, and making weather adjustments for Vermont, where he lived, and our more balmy west-coast, the timing is just about right:

I love the term, “introduced species”. It sounds so formal. Too formal, I suspect, for the actual process of plants finding a foothold in a place not their own, or at least not to begin with. They arrive in so many ways, as ballast, mixed with other seed, in imported plant matter, wrapped in damp cotton in the suitcases of those arriving from afar, wanting to bring something of their old lives with them. (There’s a walnut in my little change purse, picked up from a park in Kyiv last month, and some hollyhock seeds from the churchyard in my grandfather’s village.) I’m not making light of what can be hugely and dangerously problematic: an invasive species edging out a native one, creating imbalances in ecosystems, and everything else that can and does happen. But I think of the benefits too, though predicting them, weighing them against the damage, is not science I’m qualified to engage in. How many gardeners choose seeds that remind them of plants their parents or their grandparents grew? One of my favourite tomatoes is Black Krim, with origins in Crimea. I don’t grow many potatoes but like to have a few hills of French fingerlings, with their buttery yellow flesh suffused with pink veins.

In Ukraine last month, I loved the fields of sunflowers in the western part of the country, grown for their oil. The fields went on for miles, as lush and vivid as sunlight. They are mainly Black Peredovik sunflowers apparently and now I wonder if those are also the seeds I buy for the bird-feeders in winter? The seed I am currently hand-feeding, in small amounts, to my morning breakfast companion, who eats a few and takes the surplus away to store. I’m going to plant a few next spring to see what happens. I’ll look forward to this over the coming winter, with its long cold days. Here is the bird, paused between seeds. 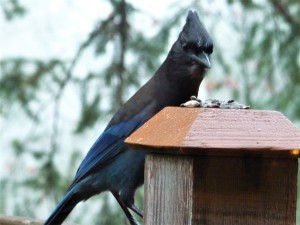 I am grateful these days to the colour of blackberry leaves, the morning cry of the Steller’s jay in the fir outside my kitchen, the scent of cedar kindling catching in the woodstove in the morning. The other day, as light was falling, I heard geese against the mountain, though I couldn’t see them because of all the cloud. But think of them! Following a signal and a map that we know nothing of, making their scribble against the sky, turning and calling to one another in clouds, and in darkness. I paused on the side of the highway on my way back from the mailbox. Galway Kinnell again:

What do they sing, the last birds
coasting down the twilight,
banking
across woods filled with darkness, their
frayed wings
curved on the world like a lover’s arms
which form, night after night, in sleep,
an irremediable absence.