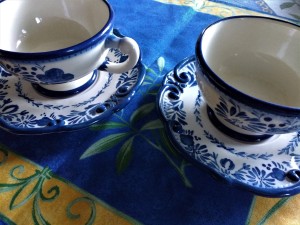 Shall I now continue this soliloquy, or shall I imagine an audience, which will make me describe…We had tea from bright blue cups under the pink light of the giant hollyhock. We were all a little drugged with the country; a little bucolic I thought. It was lovely enough—made me envious of the country peace; the trees all standing securely—why did my eye catch the trees? The look of things has a great power over me. Even now, I have to watch the rooks beating up against the wind, which is high, and still I say to myself instinctively “What’s the phrase for that?”…
–from A Writer’s Diary, Saturday, August 12th, 1928

It’s always that, isn’t it? The phrase. And the dailiness of life. Today John is putting new glass into an old window, a blue-framed window from a derelict summerhouse in the yard of the house where we lived in North Vancouver before we came to live here. The summerhouse and big house were demolished after we left and we were given permission to take windows and other bits and pieces. The windows are at least a hundred years old and every few years some of them require work. Not usually new glass but new putty, areas of dry-rot scraped out, the frames repainted with the blue I chose 37 years ago at a paint store on Lonsdale Avenue (a sort of Wedgwood blue; I’ve never seen any reason to change it). The windows have old hardware that creaks a little as you wind the windows open and some of the panes are old warbly glass that make you woozy when you look through them.

As for me, I will making pies to freeze for the winter, using Merton Beauty apples and either blackberries or blueberries. I’ll freeze them unbaked but maybe I’ll make a small one for us. Maybe we’ll have a slice with cups of tea from those bright blue cups.

And I’ll continue to work at my desk, finishing up some small edits of an essay coming out in Brick later in the fall, finding my way into The Occasions, and changing into my bathing suit once it warms up enough for a swim. The light has changed. It has the faint golden promise of fall in it. This morning I looked out at the dog rose surrounding my bedroom window and noticed that the hips are red. What’s the phrase for this little hinge in the year, not yet autumn but creaking a little on summer’s axis, asking us to prepare, to replace old glass, to fill the freezer with the season’s abundance, to take the time to look at the trees.