This is an old west where a secret cove with an old house
is called history, a raven cackling on a limb, mythology. 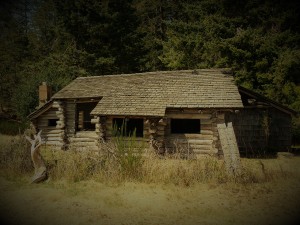 Our friend wondered if we’d like to go by boat to Nelson Island on Sunday to visit Harry Roberts’ old cabin at Cape Cockburn. Well, yes! It was clear and blue and on the way we stopped at Quarry Bay where the granite for the Legislative buildings in Victoria was quarried. You could see the old workings hidden now by trees. What you could not imagine was how someone had found that beautiful granite a hundred years ago or more, knew how straight it would split, and then figured out how to get it to Victoria in quantities sufficient to build huge structures. You also thought of nearby Hardy Island where the granite for the Ogden Point breakwater came from and how you’ve looked closely at the workmen’s marks visible on some of the blocks, marks made more than a century ago.

In this tumbledown house,
thought and wind move alike.

The cabin sits on its south-facing rise above a small pebbled cove. Our friend, an ideal guide because he spent part of his childhood on Nelson Island and a good portion of the rest of his life thus far researching, publishing, and commemorating the history of B.C. in general and our coast in particular, told us Harry’s colourful story and showed us the cabin’s interior, the summer kitchen, the sturdy steps leading to a bedroom I found myself dreaming a whole life within, and then we walked among the old fruit trees, eating Transparents and talking. I couldn’t shake the sense that we were not alone, that if I just listened carefully enough, I would hear someone cooking, a hoe in the stone-rimmed garden, the clatter of shells as someone opened oysters for dinner.

So now it’s a Tuesday morning and I’m sitting at my desk, remembering how it felt to walk into what the cabin still held of the past, its open spaces lonely for children, for the scent of woodsmoke, for someone reading poetry aloud by the fire. I could live here, I said, and in a way it’s true. Picking apples for a pie, making sure the lamps were trimmed, the water pump primed. When we sat on the beach and when we swam in the cold clean water, a seal kept watch, its head glossy in sunlight. What did it know of who left and who returned?

House: blue mountains, rain, surf stumbling on the reef.
House of live, house of childhood,
a shake and log shamble, windworn and storm white;
its desires and regrets a matter of moments
half-seen through another life. Even so
love was enormous in this secrecy.
The stars sang in the twilit garden;
morning was moonlight,
raspberries, wine clear as the wind and cold.

Note: the passages of poetry are taken from “Closing Down Kah Shakes Creek” by the late Charles Lillard (another dear friend), published in Shadow Weather (Sono Nis Press, 1996)