*The more things change, the more they stay the same. Children still locked up, a vulgarian (with small hands) wreaking havoc. Still, the other day, driving to Egmont, I saw the white waterlilies blooming on North Lake and my little bentwood box, made by Shain Jackson, still smells beautiful.

Last night I had trouble sleeping. The ugly events in the country to the south of my own filled my mind. Imagine even considering that it would be appropriate to take children from their parents, no matter how legal or illegal the parents’ attempts to cross the Mexico-US border might be. No one leaves a home country unless they are desperate. So imagine the difficulty and pain those parents have experienced already (and the stories are beyond terrible) and then imagine removing the children from their parents and putting them in cages. Imagine believing that somehow the Bible has decreed that this is just fine. Listening to privileged men and women suggest that it is within the realm of what’s humane to do this has made me so angry I could eat rocks. Spit fire.

And this only one event, one awful moment in a country’s devolution.

This morning John was outside deconstructing the little deck and two sets of stairs leading to our printshop, the home of our High Ground Press. He likes building projects and these steps and the deck are the last things that need replacing. He’s been pulling usable wood from storage under the printshop—some 2x6s used in a treehouse that was taken down years ago; some other bits and pieces. I was working at my desk when I thought it might be nice to have a cinnamon bun from the bakeshop on the Skookumchuck Trail. For years it was run by Lynn and Martin Mees and the baking was just wonderful. The cinnamon buns, brioche with blue cheese, small pizzas, huge cookies. And really good coffee. Lynn and Martin moved on to a new chapter and a young couple bought the bakeshop. I thought we could also go to the museum in Egmont where you’d find the best collection of chain saws and Easthope engines anywhere. And a scribbler from the old school at Doriston containing a child’s report on his or her own community, a place still remembered by some, including my friend Andrew Scott who wrote this about Doriston some years back. (He’s been to Doriston but I haven’t. Lucky him.)

The bakeshop was closed, still on spring hours (weekends only until July 1 when it opens 7 days a week). We crossed the road to the museum, mostly so John could ask about donating an old chain saw, and I saw the most beautiful small bentwood cedar boxes made by Shain Jackson. I bought one because I knew I’d regret it if I didn’t. It smells so rich and resiny and the abalone is soft to the thumb. 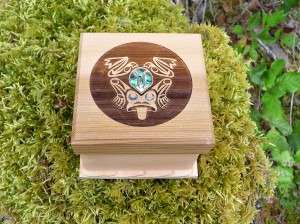 I wanted to take a photograph of the Egmont Community Hall for the project I am most emphatically not doing (a history of B.C.’s community halls). I’ll add it to the collection of materials I’ve been gathering about the halls in case someone else wants to take the project on. We’ve danced at weddings here, eaten small salmon sandwiches at funerals, and wandered in and out on Egmont Daze when hotdogs are free for kids and huge urns of coffee are steaming and the Thrift store upstairs is open for business. 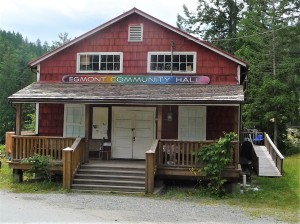 What now, I asked, because I was hungry. Let’s see if the West Coast Wilderness Lodge is open, John replied. And it was, just. We were the first people there for lunch and we had the best seats in the room that is a wonder of the world. Old fir floors and a view of Jervis Inlet: 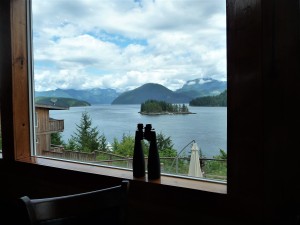 Driving back along the Egmont Road, I stopped the car by North Lake to look at the beaver lodge right by the shore. A pair of yellow warblers must’ve had a nest in the hardhack growing beside the lodge because they kept darting in and out of the green depths and another male was singing in a snag nearby. And all over the surface of the lake along the road, white waterlilies—Nymphaea tetragona?—in bloom, like a moment out of Monet. 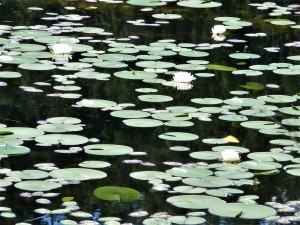 So sometimes the days are beautiful. You wake from broken sleep, you feel helpless and angry, you wonder how you can go on in a world that values lives so little that children would cry from cages while their parents were imprisoned elsewhere, and then you drive to Egmont where small wonders reveal themselves unexpectedly. Warblers, lilies, a frog with abalone eyes. If there was to be a soundtrack for the morning, it would be Michelle Shocked singing “Blackberry Blossom” because all along the Egmont Road the long thorny canes were holding blossoms up to the sun. 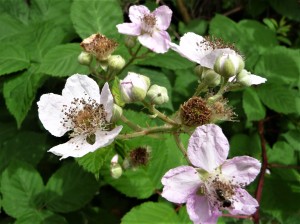