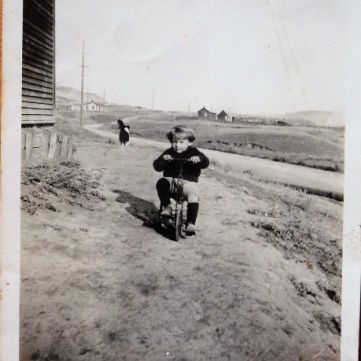 My father, on his small tricycle, c. 1929, his dog watching the road. I think of him often, particularly when I see photographs of my grandchildren. How certain gestures, features, remain over time, in the intricate mathematics of inheritance.

I consider the ghost of a child’s hand in an ultrasound image, another of a baby’s spine,my father on a tricycle,in a little metal car, grey, grey, the propped coffin on a bench in 1923, on the stair by a house I am uncertain is the one my father spent his
childhood in or an earlier one that burned. Is it the house built by Joseph Yopek or a later house?

—from “West of the 4th Meridian: A Libretto for Migrating Voices”, published in Euclid’s Orchard, Mother Tongue Publishing, 2019

This morning, 3 of my grandchildren in a cafe in Ottawa (the 4th still too small to sit on a stool unassisted). They remind me of their own fathers (my sons) and they remind me of my brothers as children, twirling on stools in cafes as we drove across Canada to Halifax, and back. Twirling and twirling until, dizzy with movement, they’d fall or be forcibly removed from the stool, and scolded. 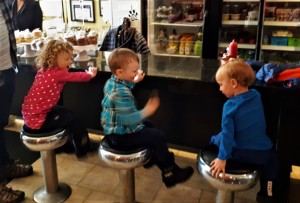