This particular recycled post comes a few days early for its 4th anniversary. But I’ve been remembering the time I spent in Roquebrune-Cap-Martin, in sunlight, among orange trees, and so it called to me.

The second evening of my birthday magical mystery tour has just concluded. There was dinner at the Cafe Carthage followed by a play, more specifically a staged radio play: All That Fall, by Samuel Beckett. We drove over to Commercial Drive for dinner and of course we ordered cous cous, rich with merquez sausage, lamb shank, and chicken, brightened by harissa. John remembered the first time he ate cous cous. He’d taken a little train from Tunis to Carthage in the early 1970s with his girlfriend Dulce and after the train dropped them off, they discovered the site was closed that day. But the guard took them on a tour anyway and then invited them to his small home for dinner. He lived alone but a woman who cooked for him brought a dish of cous cous to his apartment. It was very good, remembered John, though it was mostly grain, with a few morsels of gristly meat. The flavour was in the vegetables and the spices. And then I remembered the first time I had cous cous. I was visiting an artist couple in Roquebrune-Cap-Martin, in the south of France. I’d met them on Crete and they’d taken me on sketching trips and we became friends. When they drove back to France, they invited me to come to stay and a few weeks later, I took the train from Rome to Menton where they were waiting at the station. I tagged along on their sketching trips and one day, learning that I’d never eaten cous cous, they decided we’d go to a little restaurant they knew in Antibes and have a cous cous feast. I didn’t eat meat in those years but there was a delicious fish version and we drank coarse red wine with it. This happened either the week that I turned 21 or 22. I can’t remember which, to be honest. But there was a galette des rois the day of my birthday and that evening I was taken to the casino in Monte Carlo (just next door!) to have a glass of sparkling wine to celebrate the occasion.

The play this evening was unexpectedly wonderful. I say that having imagined that it would be terse somehow and cryptic. Beckett, after all! But it was very moving and although there were indeed cryptic moments, there was an abiding sense of darkly funny disaster which I enjoyed so much, punctuated by passages of unbearably lovely lyricism. Beckett wrote All That Fall in 1956 and it was broadcast by the BBC in 1957 but he refused to allow stage performances of it during his life. He insisted it was meant to be heard. “It is a text written to come out of the dark,” he said. His estate has recently begun to permit stage productions but insists it must be presented as a radio play.

While I was visiting the artists in Roquebrune-Cap-Martin, an elderly friend of theirs came from Paris to visit. He’d been ill and was quite frail but he was sweet. (And in the way these threads all connect, a woman I met a year later, in the west of Ireland — she had an astonishing past, was related in some way to Constance and Eva Gore-Booth, and she has a cameo role in my novella Inishbream — turned out to be this man’s cousin.) My friends took him for a drive one morning and I stayed back to do my laundry. I was alone in their house when the phone rang. This was before answering machines. My French was not good (still isn’t) and I answered nervously. There was a man on the other end and when he heard my tentative French, he switched to English. He was calling, he said, to find out how his friend Benny was. (The elderly man was Benny.) He was concerned because Benny had been so ill. I told him what I knew — that Benny was in good spirits, he was enjoying the long joyous meals, and was out at the moment on a drive with my hosts. He seemed pleased to hear this and asked me to tell Benny that Sam had called, from Paris, and to pass along his concern and regards.

When my friends returned, I gave them the message. Benny was delighted to hear that his friend had phoned. My host asked me if students in Canada studied Sam’s plays. You know, he said, Samuel Beckett? I assured him we did. 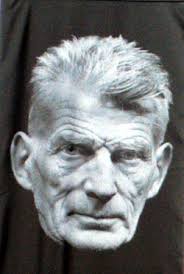 So tonight, replete with the best cous cous I’ve ever eaten, I listened to a text come out of the dark and it was both beautiful and funny and worth waiting for, on my birthday, 38 -39 years after my conversation with its author.

And as we were approaching our car, parked a few blocks from the Vancouver East Cultural Centre, a voice came out of the dark, asking about an address on that street. It was a young woman, pulling a huge wheeled suitcase, clutching a piece of paper. We told her we didn’t live in the area but it seemed that she was on the right street and it seemed that the actual address she was seeking was about five blocks away. She was confused and very French. Get in the car, John said, and we’ll find the house for you. He lifted her huge case into the trunk. She’d just flown to Vancouver from Paris, via London, and it seemed like the right thing to do to get her safely to her friend’s home. The street petered out and then continued again behind the Britannia Community Centre. But eventually we found the house. She told us that she was leaving again first thing in the morning to take the ferry and Greyhound to Sointula on Malcolm Island for a artist residency. She could have been my younger self or my daughter and in her journey I heard echoes of my own travels to an island off the coast of Ireland and a small village in the south of France. There’s a riddle at the heart of All That Fall but it’s no more or less mysterious than the riddles that shape our lives. Some days the answer is clear and sometimes it’s a voice in the night, asking if we know where 1430 is on the dark unknown street.