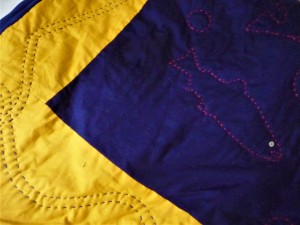 On Thanksgiving we remember our place on earth. Pies of apples gathered before the bears could eat them, cabbages salvaged from the deer, garlic dug in July and dried in the woodshed, the family we have helped to create and know will continue long after us, in one form or another. On the table, a pot of Japanese anemone and peony leaves, the long drought giving them the most beautiful claret colour. In the woodstove, split alder and fir from an afternoon’s labour where the orchard used to grow.

It was Arthur’s birthday yesterday and I made him a quilt over late summer, stitching a loose spiral of salmon in red sashiko thread on a single piece of deep blue cotton. The border is saffron yellow, a freehand watery line encircling the fish in their dark water. At the top of the quilt, I tried to figure out how to represent 3 key constellations in our sky on the night Arthur was born 3 years ago: Cygnus, Cassiopeia, and Orion. I used a star chart (the old-fashioned kind though I suspect I could have looked it up on Google) and I used shell buttons for both the stars and the salmon eyes. My thinking was that fish use celestial navigation in part to find their way to their natal streams, as well as olfactory and magnetic forces. And there are subtle forces that keep children returning home too, the stream of our lives enriched by their arrivals.

We’ve always loved stories in this house, every kind of story. Here’s Forrest reading a bedtime story to Edmond, who is 3 months old.

That quilt they’re on has a story too. For a few years, when I first began to make quilts, I used stars—Ohio Stars, Variable Stars, and others I’ve now forgotten. One year I thought, Oh, try something else. So I carefully cut out pieces to make Chimney Sweep blocks. But sewing them together, I discovered that without really thinking about it, I was making stars. And after all these years, I’m still doing that.