Looking for something else connected to my father, I found this, in the births column of The Crowsnest of March, 1955: To Petty Officer A.J. Kishkan, Stettler, and Mrs. Kishkan, a daughter. This is the first time I appeared in print, though unnamed. When I was born, on January 6, 1955, my father was at sea, as we used to say, on the HMCS Stettler. The telegram my mother sent to him was received in Hawaii. Looking for images of life on the Stettler, I found this: 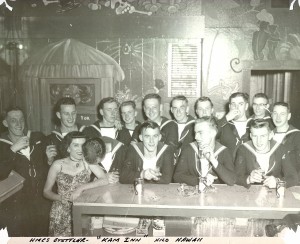 I don’t see my dad among these sailors enjoying their time at the Kam Inn, in Hilo, Hawaii. But who knows. I want to know more about his life in those years. He spent so much time away from us and in trying to figure out who he was, I’ve found strange little signposts. This is a passage from an essay I wrote in the spring, from a section about my father’s time on the MacKenzie River, cutting cordwood for steamships. (In this section of the essay, I’ve used both margins to try to weave passages together, as rivers weave and move apart. So that’s why the movement is right to left.)

I thought of my father, working for a time on one of the last MacKenzie River steamships, as a deckhand, and I think he cut cordwood too. He was 16 years old. Would it have been the SS Distributor? The SS MacKenzie? I don’t know, though my son thinks it was the Distributor, which began its life on the Thompson River. Both were decommissioned shortly after the Second World War; my father had enlisted in the last years of the war, then left the military to work in a meat-packing plant. It didn’t last and he enlisted again in the Navy, learning a trade and raising a family. (A report by an occupational counsellor says, “He enjoyed working in confined quarters aboard ship.”) But sometimes his eyes would go dreamy and he’d remember the long hours of daylight on the MacKenzie River and I wish now I’d asked about the work. (For so many years, my heart was frozen in his company.)

I’m curious about those confined quarters and tried to find images of what a radio room would have looked like in those years, when he was a radar technician: 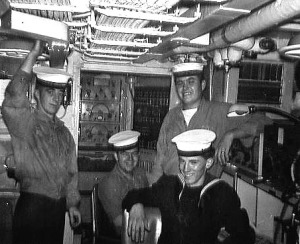 And where would he have slept, as he dreamed of his young wife in Victoria, with her two small sons and a new baby, me, while he was so far away. I’ve found images of bunks, with lockers beside them, and the thought of him in a narrow bed, in a confined space, with limited time to think about us, waiting for him, makes me wish I had our years together to experience again. I’d have been kinder. Maybe he’d have been more patient. I’d have asked more questions. Maybe he would have too.