Mostly I like the dailiness of my life. Sure, there are boring times but mostly there’s stuff to do that gives me a sense of purpose. My writing. My garden. My family. Quilts. Friendships. The work I do with my fellow organizers of the Pender Harbour Chamber Music Festival.

Yesterday was not one of those days. I was in a deep funk over the garden, wondering how to cope with the latest round of damage done by marauding ungulates. Elk this time. When we returned from Ottawa last Tuesday, I immediately knew that animals had broken into the garden. What is usually a green tangle was…bare. I couldn’t look so waited until the next morning.  For more than 30 years, we’ve relied on a fence of 8 foot high black deer-proof mesh. It works. Or has worked. I think the theory is that animals don’t see it and bump up against it, which freaks them out. Ours is strung tightly on 12 foot lengths of rebar sunk into the ground. Sinking sounds, well, easy. And it wasn’t easy because the ground is hardpan. When we rebuilt the garden in 2013 after our septic field needed work, we built boxes of recycled cedar boards and most of the beds are framed this way. Some are long barrows — the raspberry beds, for example. There are paths (that are also the lines of the field so that we can get to any potential problems without having to dig up the whole garden). I think of my vegetable garden as its own place. There’s an apple tree, many roses, lilies, perennials, and lively populations of snakes, tree frogs, some long-toed salamanders, butterflies, bees, and of course pests—slugs, woodbugs, wasps (and I only think of them as pests late in the season; when I watch them early in summer, scouring scale insects and aphids off the roses and other plants, I’m glad to have them there). A few weeks ago, we were in the kitchen and saw a doe coming up from the old orchard with her twins and John said (fatal last words), Well, at least they can’t get into the garden. 8 minutes later I was at an upstairs window and I saw the fawns on the driveway and the doe eating kale plants inside the garden. I raced out and chased her out, her escape route being to simply crash through the mesh. I could see that she got in by pushing underneath the gate. In 8 minutes she’d done a lot of damage. She ate bean vines, a lot of the kale, nibbled the squash plants, and feasted on the arugula. We repaired the section of fence she’d pulled down as she escaped and put a heavy section of old cedar railing against the gate to fortify it. (It made getting in and out a bit of a weightlifting session but no matter.)

I did have a sense of foreboding as we came home last week. It’s been so dry and the woods are parched. The garden is watered regularly and word was obviously out that there was lush greenery to be had by simply pushing through the mesh. And the next morning I went out to see that raspberry leaves, apple boughs, all the kale, the winter lettuce and squash, the lilies, everything green and succulent, had been eaten. Tell-tale scats everywhere so there was no mistaking it was elk.

Last night I dreamed of the garden and its current state. I dreamed of Donald Trump ordering people—mostly children—onto trains going to a terrible concentration camp (I don’t even want to type the name). I dreamed of our water gone bad. Yesterday, after the heaviest rainfall we’ve ever had here, I was running a bath when suddenly black water gushed out of the tap. For a few hours that was the situation, though the water was brown, then slightly discoloured, no longer black. We have a well, a deep well drilled into granite and dependent on underground aquifer; the water never changes. We wondered if our 37 years of good luck with our water had come to an end. But this morning things look better. We have some theories and time will tell if we’re right. Keep your fingers crossed?

In the night I was awake worrying about all these things. The elk, the water, the state of the world. When I realized it was morning, I didn’t want to get up. What for? At some point I need to figure out what to do about the garden. Chain-link fence? 10 feet high? Expensive. And so much work.

But just now, opening my email, there was the message: Your daily French reminder. I’ve been trying to learn French so that I will be able to keep up with my two grandsons in Ottawa. The older one moves effortlessly between English and French. His Francophone grandmother graciously talks to me in English and I’d like to try to respond to her in French. I have the usual Canadian high school French but of course never used it. I can read French, simple texts at least, but have always felt self-conscious about my limited voabulary and terrible grammar. But I’m determined to become more fluent. And daily practice seems the best solution. Part of the dailiness I seem to need to be productive. 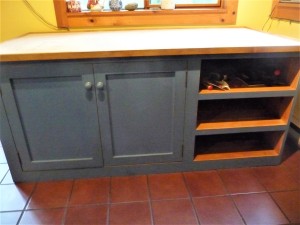 Meanwhile, John is in the kitchen (where I’m hoping the taps are running clear), preparing to tile the top of a free-standing counter area we had made for us and picked up on our way home from Ottawa. In a kitchen, things accumulate. In ours, a small convection oven and a well-used slow-cooker have kept company on a pine table under some windows across the kitchen from the actual work area. I had in mind a cupboard for that corner, with a surface safe enough for the little oven and other appliances. I wanted deep cupboards big enough for all the casserole dishes and so forth that are currently on some open shelves (so that they need to be washed every time I use them!). I kept looking in second-hand stores but nothing showed up. So we had a guy in Gibsons who makes beautiful furniture and entire kitchens (if you can afford them) make this piece to our specifications. We asked for the top to be plywood so that John could tile it with Mexican tiles given to us by friends who had some leftover when they built their house some years ago. The box of tiles has been waiting for the right project and this is it.

Something has shifted. Climate, political weather, how we treat one another on this planet, and even the habits of animals. When I was looking through photographs on the camera card, I saw one I took yesterday, as the monsoon was letting up (though before I ran a tap to see black water gushing out), and I think I want to keep it close for the next while.

This is the same window I looked out to see the doe in my garden. You can see the dead cedars Hydro will cut down this fall (victims of the drought) and mercifully you can’t see the ravaged condition of the garden. But that’s a rainbow, a small one, arching over my view.

10 thoughts on “Your daily French reminder.”