Our summer is still deciding. May was hot, June was unsettled, and today we are promised sun, warmth, and we’re still waiting. But it was lovely to begin the day with a swim and for a brief few minutes, the sun came out. Because the last few weeks were so cool and grey, we swam in the local pool. (Three weeks ago, we were swimming most mornings in the lake and thought that was how we’d continue.) I thought to myself this morning that my lake swims are a very qualitative experience. The light coming through the big trees, the swallows darting to the water’s surface for insects, the sound of ravens, the cold rush as I swim what must be an underground spring, the dense feel of the sand as I come out to find my towel.

In the pool, it’s about time and distance. I swim 50 lengths of the 20 meter pool. That’s a kilometer. It usually takes about 35 minutes (I’m no athlete) but sometimes a little less time and some mornings, maybe 38 minutes. The lifeguards play music and sometimes I like it. Sometimes I don’t get it. I know kids pee in the pool (and worse) so I try not to open my mouth. If I do, it doesn’t bear thinking about.

This morning I could smell newly-cut cedar. Last year’s extended drought meant that many young cedars died over the winter. We saw them lose fronds in late summer but didn’t realize how many had died until late spring. The Hydro guys came to our door a few weeks ago to say that they’d be coming in a month to cut down the ones that are close to the power lines. They identified 7. I know we have more that aren’t in the way of the lines and we’ll either figure out a safe way to cut them down or else leave them as wildlife trees. But at the lake, I guess the Parks crew have been cutting the dead trees. I could see one in sections by the shore. That’s what I was smelling. Another way in which the morning swim is qualitative. You stretch out your arms and move through the green water and you smell the incense of fresh cedar.

The other day John picked about half our gooseberries (we have the green ones) and because it’s still not sunny enough to be outside, I made a dozen jars of jam with a few blueberries added for colour and a lot of ginger. As I type, I can hear the jar lids snapping, one by one. Opening a jar in winter is like a postcard from summer, near Ruby Lake. 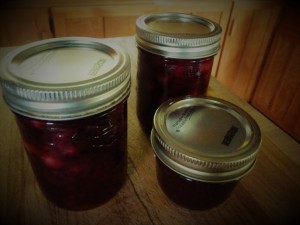