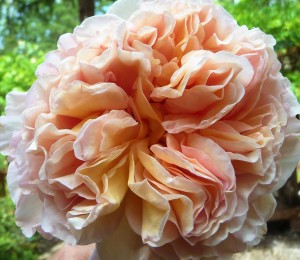 One of my favourite garden books is Green Thoughts: A Writer in the Garden, by Eleanor Perenyi. It’s not a “how to” book but rather a series of brief essays on everything from artichokes to toads. The writing is beautifully crisp, the author opinionated, and there was so much I shared of her view of plants and their place in our lives. I loved her admission of smuggling special potatoes home from France. I don’t think I’ve ever returned from a trip without seeds or acorns or bits of this and that in my bag. I know some people highly disapprove but honestly how did you think potatoes got to North America? Or Europe? Or the roses your grandmother grew? Her tomatoes, the ones she insisted were the same ones her grandmother grew in Siberia, or Italy?

I’ve written before that some of my plants came from John’s mother (and from her mother, too, because John’s mum used to bring back cuttings and other plant materials from her annual trip to Suffolk). Our mint, our wisterias, and one of our honeysuckles, the lovely Lonicera periclymenum ‘Serotina’ (also known as late Dutch honeysuckle, and you can bet there’s a traveling story there…), some perennial geranium, Algerian iris, and so on. There was also a wonderful honeysuckle, L. japonica ‘Halliana’, that I loved. It was semi-evergreen here, with creamy blossoms turning yellow as they aged, and I swear they smelled of jasmine. We had it growing up the deck where we eat our summer meals and oh, after rain, the air was heaven. We had another plant of it too, growing up some lattice by our patio. And after ten or so years, both of those plants died. It was easy to root from cuttings. In fact, if I cut stems of it to have in jugs around the house, quite often they’d have roots by the time the flowers had finished. But I didn’t know the plants wouldn’t overwinter the winter they died so I hadn’t taken cuttings. I kept my eye out for new plants at the garden centres but never found one until the year before last. I planted it against one post of the pergola John built by the gate to the vegetable garden. The garden is fenced with 8-foot deer-proof mesh and I wanted something less forbidding as an entrance. Last year the honeysuckle bloomed but this year, oh man, it’s reaching for the stars.

But there’s something about it…the flowers are tinged with pink. So I think it must have been mislabeled. I think it’s L. periclymenum, the common European woodbine, and I believe one of the parents of ‘Serontina’. It smells nice—but not like jasmine. I’m not a botanist (obviously) but I do pay attention and it seems to be that garden centres often sell plants that are not quite as advertised. A chestnut we bought 35 years ago is certainly not a chestnut. What is it? I don’t know. Mostly I don’t mind. I love the named and the unnamed. The David Austin rose ‘Abraham Darby’ for example: it’s beautiful, but is it any more beautiful than the old moss rose given me by Vi Tyner more than 30 years ago and which I thought I’d moved from its location beside ‘Abraham Darby’? (The moss roses are the ones to the right, still not quite open, but when they do, you can smell them ten feet away, both the flowers themselves and the resiny “moss” on the sepals. I have two—a deep pink one and a pale pink and while I understand there are some mosses that are repeat bloomers, mine flower only once, in early June. But I remember them all summer.) I did move the plant but some canes stayed in place, obviously.

Moss roses are centifolias (“hundred-petaled”), hybrids created in probably the 17th century with gallicas and damask roses as possible parents. It’s when I read about roses and their provenance that I truly regret my lack of scientific background. There’s a tangle of flower-types, origins, and species; and they go back 35 million years. Humans have a long relationship with them, using them for everything from medicine to perfume to food. My hero Pliny the Elder (as opinionated as Ms. Perenyi) said this of the rose: “It is employed also by itself for certain medicinal purposes, and is used in plasters and eye-salves for its penetrating qualities: it is used, also, to perfume the delicacies of our banquets, and is never attended with any noxious results.” And what would poets do without roses to praise? Listen to the 14th c. Persian poet, Hafiz:

How
Did the rose
Ever open its heart
And give to this world
All its
Beauty?
It felt the encouragement of light…

I felt that encouragement this afternoon, walking among the plants, roses entwined, the misnamed honeysuckle cascading over its supports, the robins singing the long salmonberry song in the woods beyond the house, and the light, most of all the light of late spring. Sometimes the hours are too brief to hold everything you need them to carry, too quickly they pass, but then you stop to look at butterflies in the flowering sage and it was only yesterday you brought that small plant home from a friend’s garden. You add up the hours, the years, and it was decades ago. But every spring, the flowers, the persistence. 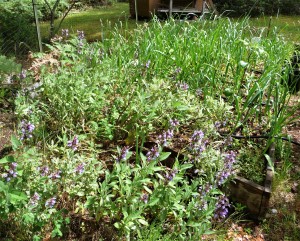