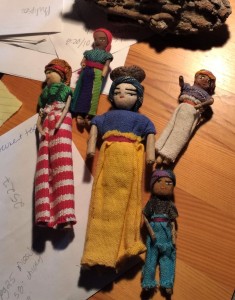 These are worrying times. Daily the news is bad. The chemical attack in Syria, the machinations of that madman to the south of our border (his coterie of grifters and crooks as bad, or worse, than he is), the environmental alarms sounding their dark music. My dreams last night were full of axes and assailants. This morning, I saw the little group of worry dolls at the back of my desk and nervously moved them closer to hand. When they were given to my daughter as a three year old, she was told by the person who gifted them that she should tell her worries to them at bedtime and sleep with them under her pillow. And by morning, voila, no more worry. When I tucked her in that night, she was crying. What’s the matter, I asked, and she said she had no worries so she didn’t know what to do with the dolls. We put them in a satin-lined box and she refused to open it. She said they made her anxious.
I don’t know what we do about the world. My own small anxieties—family, work, health—seem so petty when I think of the continuing difficulties in Puerto Rico (forgotten by its own government, it seems), the situation in Syria, other flash points in the Middle East, here in Canada where Indigenous communities are without clean water, the edges of the Mediterranean Sea where people still take to perilous waters in unsafe boats because they see no alternative…
A doll, some lines of poetry, the first hummingbird of the season by my window yesterday, and the sound of tree frogs loud in the darkness as we said goodnight to a dinner guest. Is it enough? Of course not. But it’s what I have now.

No, no more: this should be happening in myth, in stone, or paint, not in reality, not here;
it should be an emblem of itself, not itself, something that would mean, not really have to happen,
something to go out, expand in implication from that unmoved mass of matter in the breast;
as in the image of an anguished face, in grief for us, not us as us, us as in a myth, a moral tale,
a way to tell the truth that grief is limitless, a way to tell us we must always understand
it’s we who do such things, we who set the slant, embed the tip, lift the sledge and drive the nail,
drive the nail which is the axis upon which turns the brutal human world upon the world.
—from “The Nail”, by C.K. Williams