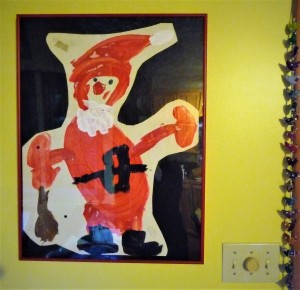 I first heard Dylan Thomas’s recording of A Child’s Christmas in Wales when I was a teenager. It might have been my favourite high-school English teacher George Kelly who introduced me to that iconic tale. It struck a chord, as it was meant to. (George Kelly was the first person who told me I could be a writer.) I remember making batiked Christmas cards inspired by the Ellen Raskin woodcuts 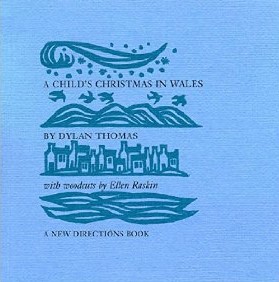 that illustrated the New Directions edition of the, well, not quite a poem, unless one calls it a prose poem. A tale might be the best term for it after all, a summoning, complete with fire and music and cups of good cheer.

One Christmas was so much like another, in those years around the sea-town corner now and out of all sound except the distant speaking of the voices I sometimes hear a moment before sleep, that I can never remember whether it snowed for six days and six nights when I was twelve or whether it snowed for twelve days and twelve nights when I was six.

My teen years were filled with yearning. I wanted a life that included beautiful poems, handmade cards, Christmas traditions of nuts and chocolates in pretty foil wraps, even a small ceremony of the tree itself. I wouldn’t have put it like that and that does sound a little shallow, doesn’t it? But I wanted a kind of dense accumulation of Christmases so that each lived within the memory of the ones before it, extending as far back as the first Christmas. I’m not a Christian but I am willing to believe in a sort of miracle this time of year. That a newly-born child might be invested with hope. That stars might be read for their guidance and meaning.

So today we are busy with the work of bringing in our tree from its resting place in the woodshed, bringing out the boxes of ornaments, readying ourselves for the small rituals we have always observed. One of them is the hanging of Brendan’s Santa in the dining area. I imagine he was painted in about five minutes, in kindergarten, and done with the least amount of effort. A few quick brushes of paint, an artful beard, a decision to include a small sack of gifts (looking not unlike a turkey drumstick, or a club), and there you have it: Santa in an insouciant mood, his belt buckle the artist’s own signature.

I can tell by the cold draft at my back that the tree has come in. I can even smell it, the fresh sap of a Douglas fir, the scent of the mountain brought down to a house in the woods where the ceremonies continue. One year John and I were awake early, waiting for the children who were maybe too old to want to race out for their stockings before light. And John said, “What’s that? I think I hear bells.” I listened, and yes, I thought I heard bells too. But it was the metal wind-chimes turning in the wintry air. Or was it?

I mean that the bells the children could hear were inside them.

When I came downstairs this morning, I heard the last part of A Child’s Christmas in Wales, an annual tradition on the CBC on Christmas Eve day. All that lush language, all that careful detail collected to make an idealized compilation of Christmases past, complete with house fires, ghosts, postmen, and snow. That teenaged girl was listening, as I listened, though I hardly needed to: I know the tale by heart. Last night, driving back from an early supper at the local pub after collecting Angelica from her flight from Victoria, I was already hearing my favourite part.

Looking through my bedroom window, out into the moonlight and the unending smoke-colored snow, I could see the lights in the windows of all the other houses on our hill and hear the music rising from them up the long, steady falling night.

A few lights blinking on the other side of Sakinaw Lake, the most beautiful stars, and the smoke from our fire waiting for us at home.

2 thoughts on ““…the bells the children could hear…””