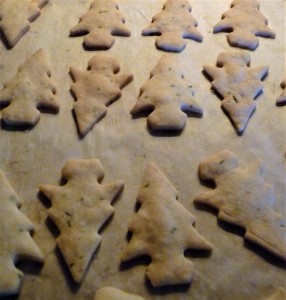 There was never much time for thoughtful reflection all those Christmases when my children were young. Baking, making things, cutting lino for our annual letterpress cards, school parties (including at least two for which my children had promised their teachers I’d provide gingerbread boys for the entire class and then forgot to tell me until bedtime the night before…), the Carol Ships party at Edith Iglauer’s house when we’d all stand on her deck and watch fishing boats strung with lights float by with carolers singing over the dark water. I remember sitting on her low couch afterwards with 3 children sleeping across my lap. I felt things intensely but didn’t seem to have time to think about what they meant, what each thing meant when it was happening, and now it’s part of my vast archive of memories, and I have time to summon up those years and remember them.

Today we cut our Christmas tree. We used to do this on December 23rd or 24th, bringing the tree in on the morning of the 24th to decorate. Some years the tree came from our woods, a weedy fir in danger of being crowded out by the bigger neighbours. Other years we downloaded a permit to cut a tree from under the power lines. We walk there fairly often and keep our eye out for likely candidates. The trees grow to a certain height and then the crews come to cut them and shred them to keep the line clear. This is where we went this year, wanting to have a tree home early as there are several events over the days leading up to Christmas. We had a few in mind. I liked this one’s bendy wood near the top: 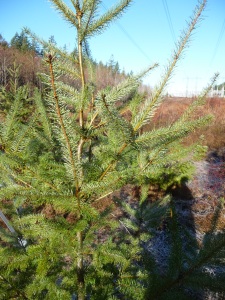 This one was clearly a favourite of the Roosevelt elk that roam the lines. 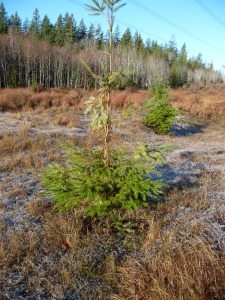 But then we found the one— 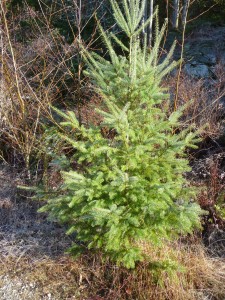 —that we knew would be beautiful dressed in all our old ornaments: the glass stars made by our friend June; the wallpaper trees studded with glittered macaroni; the Chinese paper lanterns sent to John’s family from his grandmother in England shortly after they’d emigrated in the 1950s; the felt birds and wooden fish; lumpy angels; string balls formed over balloons, now collapsed. In short, a lifetime of saving, of storing away a season of memories in a box in a dark closet. This year’s tree is in a bucket of water in the woodshed to be brought inside on the 24th so that we can decorate her with Angelica and the ghosts of all those who’ve helped in the past, some of them gone. Last Christmas it was Forrest, Manon, and Arthur, joined by Angie, and the year before, Brendan, Cristen, and Kelly —and the very beginnings of Henry. Yesterday Brendan sent a video of the children decorating their tree and the most poignant footage of Henry trying to find a way to place a piece of a hairdryer on the tree. He’s 1 and not entirely clear on the concept of ornaments yet. But given what goes on our tree, maybe he’s not far off.

I can see our tree waiting as I work at the kitchen counter, so green against the wall of firewood. Already a squirrel has raced along its branches. I kept peeking out as I rolled out shortbread fish and stars and the special ones cut into trees and studded with rosemary leaves (as Ophelia told Hamlet, “There’s rosemary, that’s for remembrance; pray, love, remember; and there is pansies, that’s for thoughts…”, and she of all people knew about herbs and their latent power). I was listening to satellite radio as I cut and baked and found myself in tears hearing a Richard Thompson song I’d never known:

And she never could resist a winding road…

Somehow it seemed to be about our tree as I walked behind John back to the vehicle. You can’t see our Element. It’s beyond the bend in that winding road. Joy hasn’t disappeared but it’s cold out and we need to remember that trees come in during the shortest days to remind us of what comes next. The light returning, little by little, and if we take care of our fires, the embers will last. 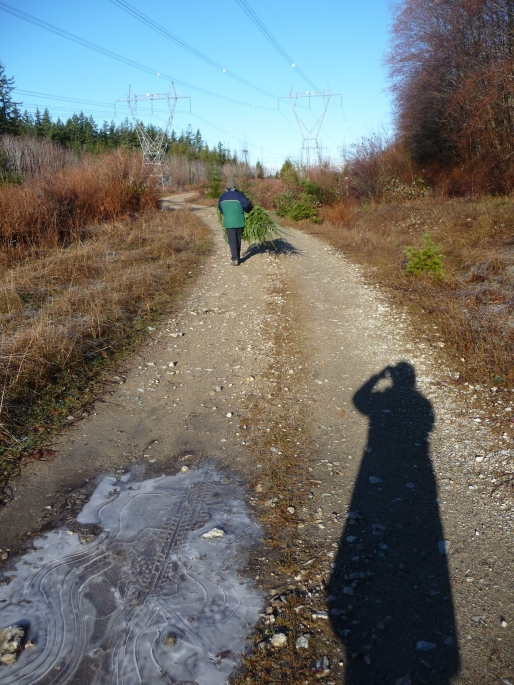 3 thoughts on “bringing home the tree”