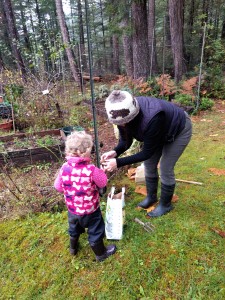 Yesterday, during a break in the storm, I planted daffodils with my granddaughter Kelly. She’s 3. We had a bag containing 50 bulbs and we planted them all in rough areas where I want a bit of colour next spring. She used a small trowel and fork to begin the hole and then I used a bigger garden fork brought from England by John’s mother after her mother died in the early 1980s. It’s a fork that travelled from Sheffield, where John’s grandparents lived and where his mother was born in 1920 and where John was also born in 1947, to Felixstowe on the Suffolk coast where Grandmother Mabel went to live after she was widowed.

When the holes were deep enough for the bulbs, I scattered a handful of bone and kelp meal and Kelly placed the bulbs in, rooted end first, three or four in each hole, and then we covered them up with the soil and moss we’d dug up. I was surprised at how patient she was. Her mum and dad said she wants to be a gardener when she grows up and she certainly has the stamina for it at this point in her life, because part-way through our planting, it began to rain again. Digging, placing the bulbs, covering them up…and walking to the next area. I’ll take a photograph of them when they’re in bloom, I promised her.

We planted ten bulbs in the little enclosure where I put a copper beech tree the summer after my mother died. I planted it in memory of my parents, in memory of Bukovina, where my grandfather came from in the early years of the 20th century. Bukovina means “place of beech trees” and this tree will outlive us.  Its leaves are the most beautiful coppery brown and they have a lightness to them.

While we were planting daffodils, Auntie Angie was walking around with her brother Brendan (Kelly’s father) and Henry, who is 1. Angie showed her nephew and niece a tiny salamander she found under a rock. 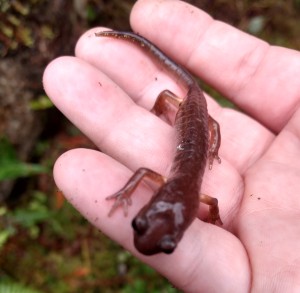 It warmed up in Angie’s hand and was eager to return to its rock. I thought of a poem by Denise Levertov, “Living”, which somehow was about our day, our lives:

A red salamander
so cold and so
easy to catch, dreamily

moves his delicate feet
and long tail. I hold
my hand open for him to go.

Each minute the last minute.