This morning I unwrapped all the fabric I dyed yesterday and washed it, rinsed it twice, and hung it on the clothesline. 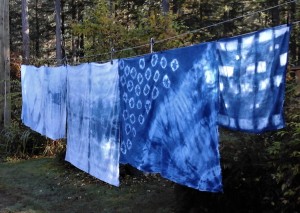 It’s never quite what I imagine or hope for but I’m always so excited about the results. The darker piece on linen (second from the right), for example. I tied stones from Trail Bay into a sort of diagonal grid for half the length, a technique called kumo, and then simply bound the rest with hemp twine. (It seems to hold best.) I love how the stones left their impression in the linen: 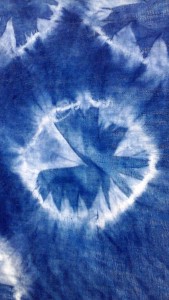 You can see a bird there, or a snow angel. Or the heart of a flower. I recorded this passage when I read Yoshiko Iwamoto Wada’s extraordinary Memory on Cloth: Shibori Now:

When the cloth is returned to its two-dimensional form, the design that emerges is the result of the three-dimensional shape, the type of resist, and the amount of pressure exerted by the thread or clamp that secured the piece during the cloth’s exposure to the dye. The cloth sensitively records both the shape and the pressure; it is the “memory” of the shape that remains imprinted in the cloth. This is the essence of shibori.

So the cloth remembers but it also interprets that pressure, those shapes. A stone from a beach on the Sechelt Peninsula becomes a bird taking flight, a child in snow.

And maybe my favourite piece? A stained but intact linen tea-cloth from my mother. I used a technique called itajime, where I pleated the cloth and then used wooden blocks of varying sizes to make a resist pattern against the indigo. The larger blocks I tied with hemp string and for the smaller, thinner ones I was able to use some clamps.

Look at the light coming through those windows!

Yesterday I waxed fish onto an old linen sheet and then folded and wrapped the sheet around pvc pipe for the effect called arashi, or storm. When I put the cloth-bound pipe into dye this morning, I realized my dye vat was exhausted and so I had to prepare a fresh batch. I’ll spend the afternoon dipping and turning and by tomorrow morning I’ll know if I have what I’m hoping for: a watery sea with a spiral of salmon turning in its centre.

1 thought on “So the cloth remembers…”