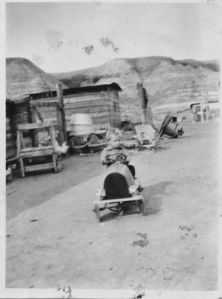 It’s a strange experience to be pursuing the sad origins of my father’s family at the same time that my immediate family is growing and flourishing. In Edmonton, on the same greyscale film as these old photographs, oddly enough, I viewed the ultrasound of Cristen and Brendan’s baby, due in September. I saw the baby’s hand, the baby’s face. And last year, in late February, as John and I visited Amsterdam to attend a wedding, a call came to our hotel from our older son Forrest and his wife Manon to tell us that they were expecting their first baby. Moments later, an ultrasound of beautiful Arthur arrived on my small Samsung tablet. I hold all of these in my mind and my heart’s archive, these grey approximations of the lives I cherish, even the ones so far away in time, that I will never know exactly where the boy who rode that little car lived, or where the family gathered in front of a weathered house dispersed to after the funeral. And did that boy’s grandparents, my great-grandparents, back in the small house in the valley below the Mionsi forest, ever see a photograph of him? Ever learn his name? They never saw their daughter Anna again.

A time of birthdays. It’s Arthur’s today — the boy in the passage above, from Euclid’s Orchard, who appeared first to us in an ultrasound image in an Amsterdam hotel, is two. He sings, he loves his weekend breakfast at Bobby’s Table in Ottawa, and this morning he was celebrated in that restaurant with his own pancake. 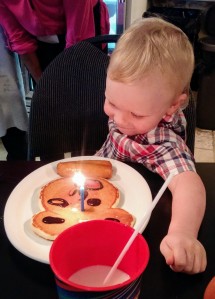 Via Skype, we watched him open the package of gifts we sent: a book, a pirate flag, a pirate ship puzzle, and other small things (we also sent him a wooden balance bike in summer so he could use it before the winter weather arrived). I think he liked the little soft globe, the earth writ hand-sized, best. That’s always the way with little kids. They like the wrapping paper (Arthur was drawing on the brown paper I’d wrapped the box in before his dad wondered if he’d like to do the puzzle), the tiny presents —a wee plastic aquarium you put water in and the fish grow!; but of course the adults tend to think the bigger the better.

Arthur’s cousin Henry turned one exactly a month ago. And the great-grandfather of both these boys would have been 91 in a few weeks. He is the boy in the little car in that bleak farmyard in the photo above. His is the shadow I live inside, mostly gladly, a shadow left by poverty and complicated history. He would have been good to these little boys, showed them how to use a fishing rod, and maybe even taught them Morse code. I cast my own shadow too, the one my oldest grandchild noticed in May as we were walking on the street in front of her house in Edmonton. Sometimes it dragged behind us, sometimes alongside us, a grey approximation of how we are connected across time.