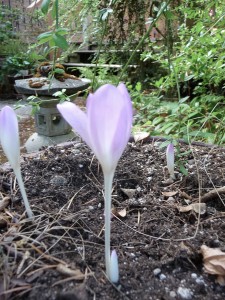 The other night I heard the most unearthly sound as I worked at my desk, window open. It was actually more like early morning—I woke at 3 and couldn’t get back to sleep so I came down to see if I could find my way into an essay-in-progress.  The sound was close, just to the south of the house, the area where the coyotes den, though we haven’t seen them much this year. Not owls, not drunks on the lake below. John was upstairs and later I asked, Did you hear that cry? and he replied, Yes, just as he dropping back to sleep.

This morning we went early for our swim and the man who caretakes the small regional district park on Ruby Lake was there, raking the sand and picking up litter.  He told us he’d seen a cougar crossing the highway below our place yesterday morning. As I swam lengths in the green water, I realized that it must have been a cougar we’d heard, a female in heat. There’s a moment in the title essay of Euclid’s Orchard where I recall an earlier moment when a sound woke us, though we were in a tent that time:

I don’t remember when coyotes arrived at the north end of the Sechelt Peninsula where we built our house in the early 1980s. There were coyotes in Vancouver, certainly, but not on our part of the coast. People said that a healthy cougar population kept them away. And in those years, we heard regular reports of cougars passing through schoolyards, hovering on the beaches, prowling the hiking trails along the spine of the peninsula. We heard one once when we were living in a tent with our first baby, building during the day and collapsing onto the foam mattress within the canvas walls at night. We heard it scream— yes, it was blood-curdling—and our dog, Friday, a big English sheepdog cross who slept under the tarp by the entrance to the tent, began to dig under the plywood platform we’d built so that the tent would be off the damp ground; she wanted the safety of the small space between earth and plywood. Now I know the cougar was probably a female in estrus, alerting males to her availability. But in the darkness, it was as wild a sound as I’ve ever heard.

There are a lot of deer around now. In the years I’ve lived here, I remember the cycles of deer and bears. Some years there would be many, others when you’d hardly see an animal. This year there are lots of bears too and I hope there will be a good return of coho in local streams to give them a big protein meal to sustain them over winter. A cougar moving through this territory is a healthy thing, I think. And that sound in the night? A privilege to hear it.