There’s a lot of cooking going on. Five pounds of spot prawns (thank you, Joe Denham!) briefly boiled, then served with tangy butter made with the succulent cloves of Metechi garlic. Sourdough bread. Salad from the garden. Last night, French fingerling potatoes dug with the help of Arthur and roasted with a bit of duck fat and olive oil to have with prime rib beef. Raspberries picked in the morning by John and topped with creme fraiche. Tonight friends are coming for barbecued sockeye and a galette of gooseberries and blueberries. Arthur helped mix the berries with some honey and lemon zest. And then he measured black beans from one container to another because he’s not yet two and he wants to do things himself. 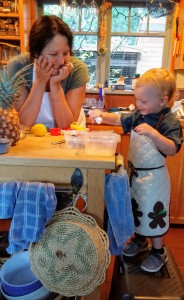 After we cooked, we swam. We were the only ones at the little park and the water was green and lovely. Arthur looked exactly like his father Forrest looked at his age and John and I were taken back more than three decades. Same place, same water, same trees, but all of us older. A kingfisher flashed by, rattling, and settled on a limb of cedar hanging over the lake. Name the poet, I called, reciting the first verse:

As kingfishers catch fire, dragonflies draw flame;
As tumbled over rim in roundy wells
Stones ring; like each tucked string tells, each hung bell’s
Bow swung finds tongue to fling out broad its name;
Each mortal thing does one thing and the same:
Deals out that being indoors each one dwells;
Selves — goes itself; myself it speaks and spells,
Crying Whát I dó is me: for that I came.

(And to be honest, I couldn’t remember the whole verse but the first two, and last two lines…) There was some delay. (My husband a poet, my son a scholar.) Think Jesuit, I said. And no, not Dylan Thomas, not Roethke. Hopkins! Selves, what I do is me. Morning light on the water, ravens klooking nearby, our bodies cool and buoyant, the prospect of coffee on the deck with lemon pound cake and the scent of tomato plants. (Wish you were here, too, Brendan, Cristen, Kelly, and Henry.)