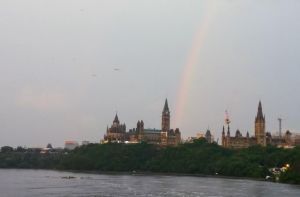 Stare in the morning shroud and then the day began
I tilted your cloud, you tilted my hands
Rain falls in real time and rain fell through the night
No dress rehearsal, this is our life

If you’re celebrating Canada Day (and I know many have problems with the notion), there’s no better place to be than Ottawa. Forrest hung flags on the porch of the house and Arthur (who is nearly 21 months) loved going out to look at them. The Franco-Ontarian flag, the Canadian flag, and the B.C. flag. Drapeau, he kept saying with delight. Drapeau!

The day  began wet, with a low grey sky. We went to the Aviation Museum, which is nearby, and a good place for a toddler on a rainy day. There were thousands of people there—inside, outside, dripping wet, almost all of them dressed in red and white. We were greeted by volunteers offering tattoos and of course we all accepted. When the sky cleared, we went outside for gelato and to see a helicopter rise up, the wind from its blades fanning us all.

It cleared enough for us to eat dinner under the vines and to see the Snowbirds fly over at least four times. I remembered the times the planes came low over Sakinaw Lake, perhaps 25 years ago, when our neighbour’s son was one of the pilots and the team would be enroute to Comox. It felt like Armageddon, those fast planes swooping over a quiet lake on a remote part of the west coast. But over Ottawa on Canada Day? Part of the celebration.

We took a bus downtown and then walked through torrential rain to the Canadian Museum of History where Forrest has been working for five years, researching and helping to create the new Canadian History Hall. We didn’t intend to visit the Hall and seeing the crowds lined up to have a glimpse of it made us glad we’re planning to go tomorrow. Our destination was the concert by the Lost Fingers, which was wonderful, even without much amplification (they were to perform outside and I guess the decision to move them inside was last-minute…). Crowds, crowds, all in such good spirits. Thousands and thousands of people everywhere you looked. Every kind of person. Old, young, every imaginable ethnicity. We were soaking wet but somehow it didn’t matter. Most people were wet. Most of them had waited in lines, walked (as we did) several kilometers to get to the Museum, and there was such friendliness and excitement. After the concert, we went up to the terrace where Forrest’s colleagues were able to watch the big screens showing the concert on the other side of the river. The Prime Minister and his wife Sophie introducing singers — Gordon Lightfoot, who’d performed for the 100th birthday, singing If You Could Read My Mind, which we’d heard the Lost Fingers perform an hour earlier. The last number was a recording, the Tragically Hip singing Ahead by a Century, with the lyrics projected on the huge screen, and voices in the darkness joining them.

Then the fireworks, as spectacular as any I’ve ever seen, starbursts and exploding blossoms of light over the dark river.

From where we were, we couldn’t see the tipis by the main stage in front of Parliament. There’s a lot wrong with our country and it’s a good time to remember those things. It’s too late in our history for the injustices to go unchecked and unacknowledged. Economic and educational disparity, poor water: all of it, any of it, is unacceptable. But we also have a country in which great things are possible and we need to insist on fairness and equality. Looking at all the faces around me, listening to them sing, watching the fathers hold their children up to see the beautiful lights in the sky, and the mothers consoling babies for whom the noise was too much, the teenagers waving wands decorated with maple leaves and carrying little flags, I felt I was part of something big and beautiful. Not perfect. But it’s up to us to try harder, to insist that those we elect work towards a better system that serves us all well, not just some of us. Or maybe even most of us.

First we’d climb a tree and maybe then we’d talk
Or sit silently and listen to our thoughts
With illusions of someday casting a golden light
No dress rehearsal, this is our life

(thanks to Manon for photographs…)

4 thoughts on “no dress rehearsal, this is our life”