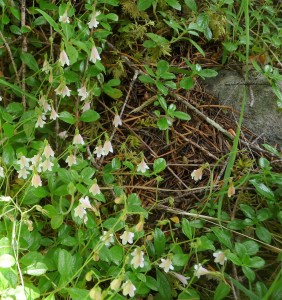 A week ago, foxgloves, yellow violets finishing, flashes of orange on the side of the highway that I knew were Columbia lilies, flashes of orange down the bank that I knew was the native honeysuckle, hummingbirds drinking deeply from the trumpets we used to taste as children. And today, on a walk on one section of the Suncoast Trail, orchids just about to bloom (or a week or so away), pink wintergreen (the prince’s pine still in bud), the last of the bleeding hearts, salal full and creamy, little clumps of rattlesnake plantain orchids about a week away from opening and alongside, what I think are ladies’ tresses. Thimbleberry by the fast creek. Siberian miner’s lettuce. Enchanter’s nightshade. Bending down to the scent of almonds in the twinflower patch—so beloved of Linnaeus that he gave the modest plant his name.

In the next century
or the one beyond that,
they say,
we can meet there in peace
if we make it.

To climb these coming crests
one word to you, to
you and your children:

—Gary Snyder, from “For the Children”