When we drove into the Waterton Lakes park, we were listening to Dylan. “Knockin’ on Heaven’s Door.” A song kind of melodramatic and full of guns but still somehow poignant. If you can listen to a whole song for a single line, a refrain, this is the one.

There were so many moments when I felt I was at that door. Early morning, walking along Pass Creek (this is one of its names and for obvious reasons, it’s the one I’ll use), through the red rock chasm, glacier lilies in profuse blooms on the slope. Driving the bison paddock where male bison were in the wallows and the females were settled along the edges of a small  lake, their young stilty-legged beside them. And mountain bluebirds on fenceposts— 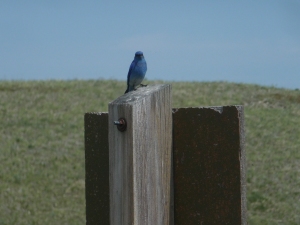 Last night we had a drink at the bar in the Prince of Wales Hotel. We didn’t stay there but I thought I’d like to ascend its long driveway and have a glass of something sparkling as the light faded. The view of the lake in its bowl of mountain was sublime. When we wandered out into the lobby afterwards — a huge baronial hall, actually — John saw the dining room and decided we should have breakfast there this morning on our way to Pincher Creek, then west on the Crows Nest highway. We were the only ones there for the first while, eating our eggs Benedict (well, mine were Florentine) at a table overlooking that serene view, watching three bighorn sheep come towards the tall windows, stop just in time, then settle on the grass in front of us. 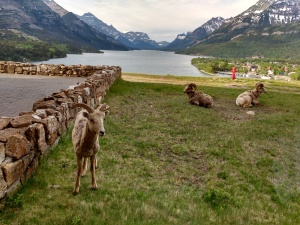 Now in Creston where we just ate delicious Indian food and drank some local Baillie-Grohman wine, a 2016 Récolte Blanche, lovely with the spicy lamb and paneer. Tomorrow we drive west towards home, through the Boundary country where my grandfather worked in 1911 at Phoenix and where I always feel my heart widen in those open spaces between Grand Forks and Osoyoos.  If we’re lucky, there will be bluebirds near Princeton and we’ll watch for the beautiful St. Ann’s church near Hedley. If heaven’s door opened, I know what I hope to see.

2 thoughts on “on heaven’s door”