Celebrate the light! I’m offering my three novellas for the grand price of $45, postage included. Visit my contact page if you’re interested in emailing me with an order. (I can accept cheques or payment via Interac. Not set up for Paypal. Sorry….)

If you go to the menu on the right-hand side of the page and click on Books, you can read reveiws of these novellas.

I had a difficult relationship with my father. I loved him and I believe he loved me. But we couldn’t talk to one another easily. He found me remote, as I found him. He taught me some important things, though, and I miss him. (He died in 2009.) I talk to him more and more, to try to limn the dimensions of our relationship — I always thought it kind of one-dimensional but realize now it was complicated and even nuanced. In my forthcoming book, Euclid’ Orchard, there is an essay about this: “Herakleitos on the Yalakom”. In the essay I talk to my father in a way we were never able to talk in the years I lived with my parents, and afterwards, when he and my mother visited us here. I tell him how I wish things had been different. It might be too bitter. But it’s honest, if that matters.

The old-fashioned knots you’d tied long ago wouldn’t loosen enough to let you take ease in a chair on the deck of a cabin. And by then the fish knife had gone to my son. Herakleitos on the Yalakom River, on the Cowichan, on the far-seeing MacKenzie where you were young, the Red Deer, all those waters changing as we changed—and were ever the same. There were roads that led to them, and away.

I think about my father a lot now that I see my sons immersed in fatherhood. They are tender and loving with their children. 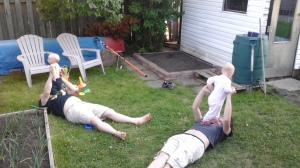 My father was born in 1926 to very poor immigrant parents. His father was a coal miner and he was illiterate. No bedtime stories. My father grew up not knowing anything about his parents’ parents, their extended families. I explore this in other essays in the collection, trying to map his emotional geography, which is now my geography, my maps scribbled with the cryptic markings of love and loneliness. Of regret and sorrow.

We spent the weekend in Vancouver, with our son Brendan, daughter-in-law Cristen, and their two young children. Our daughter — Kelly’s cherished Aunty Angie (“My Auntie Angie.”) — joined us for part of the time. We ate great meals and laughed a lot and had some outings that I know will be happy memories for Kelly. (Blue frogs at the Aquarium! Big fish! The soft pink feet on the ducks in the tropical conservatory…) Kelly has plans for May when we will visit her family in Edmonton and she is thrilled that her Auntie Manon, Uncle Forrest, and cousin Arthur will be there at the same time. (We are all going to build a new porch for Brendan and Cristen’s house.) She is very excited at the prospect of sharing the double stroller with Arthur. And of throwing stones into Mill Creek with him. By then Henry might be able to throw a stone too. Over the weekend, he was happy to lie on the floor with his Grandpa John, pushing toys back and forth.

The road that leads to Edmonton from the west coast is one my family drove many summers to visit our grandparents who lived in Beverly, in a small plain house on a quiet street near the river. It was a river my father remembered in his later years — the smell of poplars coming into leaf, its dangers at spring melt. And the Red Deer, that flowed past his family’s first home in Drumheller. All the rivers of our shared geography, unchanged, and constantly changing. Although my father never read Herakleitos, I found him in Guy Davenport’s elegant translation. I found him over and over, changed and unchanged. “The river we stepped into is not the river in which we stand.” It never was. But where else can I look?

Wish we didn’t have to leave… 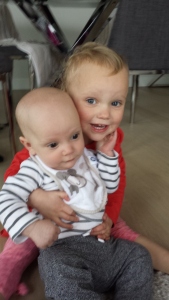