A few weeks ago, I wrote about seeing the Piero della Francesca exhibit at the Frick Collection in New York in 2013. I was interested to learn that Piero had written treatises on mathematics and I followed up by looking at some of the commentaries on the treatises. I’m pretty much math-illiterate but the language and the imagery fascinates me. I’ve written a long essay on this fascination (and my own math anxiety) — and because I have a kind of magpie mind, always finding objects and ideas that I like for their brightness and beauty and not necessarily because I understand them, the essay also explores coyote song, quilting, bees, and love. I called it “Euclid’s Orchard” and it’s the centerpiece of a collection of my essays due out in September, 2017.

I wanted to know more about Piero and math so I took advantage of the Sechelt Library’s generous interlibrary loan program and ordered Piero della Francesca: A Mathematician’s Art, by J.V. Field. It’s really wonderful. I’m reading about Piero’s background and training right now. Some of the material I’ve encountered before. The first section discusses the 15th c.Florentine Cennino d’Andrea Cennini’s treatise on the skills needed to pursue art. This is Il Libro dell’Arte and I read it while I was writing “Arbutus menziesii: Makeup Secrets of the Byzantine Madonnas”, one of the chapters in my memoir, Mnemonic: A Book of Trees. I wanted to know about pigments, how early painters compounded them, and something of the chemistry behind them. Cennnini was so helpful and one thing led to another. So I’ll read this book and maybe by the end I’ll know more about how Piero planned and organized his work.

The painting I’m particularly interested in is the “Madonna del Parto”, a fresco painted on a cemetery chapel wall in Monterchi, a small Tuscan hill town. 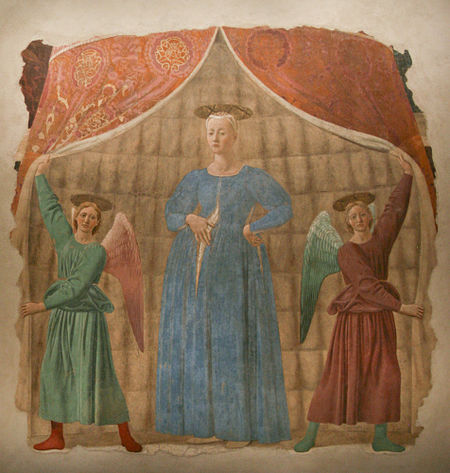 The nature of fresco work — painting on fresh wet plaster so that the pigments merge with the plaster as it sets, becoming part of the wall or other structure — means that Piero must have planned so carefully, choosing sections of the work to paint each day (for 7-9 hours, beginning an hour or so after the plaster had been laid). No opportunity for correction.

I’m interested in the blue of the Madonna’s gown. Piero would have used ultramarine, made from ground lapis lazuli, probably coming from Badakhshan, a province in Afghanistan. And he probably would have added the pigment once the fresco was dry, because I understand that the blues don’t adhere to the damp plaster very well. But look at that blue! So radiant. And so expensive. Because of its cost, it was usually reserved for painting the robes of the Virgin Mary. What I love about this Madonna is that she’s so thoughtful. Often the Madonnas of the period are holding books on their bellies, an allusion to the word of God. This woman eschews the book and holds her stomach with one hand, feeling a heartbeat or the kick of a foot, the other hand easing out a pain (perhaps?) in her hip. She is in her body, a gorgeous pregnant woman, less absorbed by faith than by her own impending maternity. Or both? Her halo is perfectly elliptical and in the book I’m reading, there are reproductions of Piero’s complicated mathematical formulas for drawing heads. He was a geometer with a perfect eye.

And look at that tent, embellished with pomegranates, symbols of Christ’s passion, but maybe also a nod to the Madonna’s own cravings. (I remember how much I loved pomegranates while pregnant!) In other cultures, particularly Islamic ones, the pomegranate represents fertility (all those glistening seeds!). And remember Persephone, condemned to half the year in the underworld because she’d eaten 6 seeds at the suggestion of Hades.

What a perfect fresco for a cemetery altar wall. A reminder of life and death and the way two are entwined. In his review of the Piero della Francesca exhibit at the Frick, Peter Schjeldahl writes, “Here was the circumstantial drama of a ripeness with life in a place of death.”

2 thoughts on “the circumstantial drama of a ripeness”