Since the beginnng of January, I’ve been swimming three times a week, sometimes four. There’s a pool and gym at the local high school and for years my children took lessons there. We’d go sometimes on winter weekends, especially when the power was out for a few days, as was more common in those years. (There’s a new kind of wire now running along the Hydro poles and we don’t have those long outages any longer, though we still have a few days here and there when the power goes out and we resort to lamps, a Coleman stove).

But the pool. I don’t much like chlorine and I don’t exactly like the notion of swimming back and forth without much purpose. Whatever it was that happened to me after my bout of pneumonia in late August had some unexpected side effects. One was pain in my right knee. Sometimes it was too severe for me to go for the long walks we like to take most days. It didn’t occur to me until quite late in the fall that swimming might alleviate the pain or at least allow me movement. And then it was Christmas so I didn’t bother looking for my bathing suit and figuring out the pool schedule, though by then John had begun to swim a couple of mornings a week. Home he’d come with news of the world — or least news of the world of Pender Harbour retirees.

So I began to join him in early January. There’s something that happens a few laps in. My mind clears, I find my way in my breathing and in the water itself (because water can resist you if you don’t find where you should be in it), and some deep thinking begins.

I’ve been thinking about what happened to me in the fall, why I felt, with the uncertainty of my health situation, that I was between worlds. At night the sky shimmered with stars and I wanted to be among them. My dreams changed. I saw things in my daily life, just out of the corner of my eye. People I knew long ago. People who’ve died. It was comforting in a way. Whatever happened, there would be company. I saw my mother in dreams a few times. I thought of Odysseus’s journey to the underworld, “the realm and region of the Men of Winter”,  and how he found his mother. She told him she died not of any true illness but of loneliness for him. And reading Book Eleven just now, A Gathering of Shades, I remember all over again why I love Robert Fitzgerald’s work with this great poem: “Here was great loveliness of ghosts!” If they are lonely for us, so are we, for them.

I am grateful that the worst hasn’t happened (or been diagnosed). I’m grateful to have the opportunity to carry on with my life, which I’ve always loved. But I think I’ve learned things about what waits for me. I had such clarity in the fall. I hope I don’t lose that. I knew what I wanted to do with my time on earth. I knew what was important. I wrote and sewed and planted a hundred tulips. I fed the birds with such tenderness, because what if it was my last fall?

In 2013, in mid-winter, we had to have our septic field rebuilt. Because we’d made our big vegetable garden over the field, we had to dig out everything we could — raspberry canes, gooseberry bushes, roses growing there because the fence protected them from deer and elk, an apple tree, huge perennial herbs, bulbs of every sort. We dug things up and put them into temporary pots and then the man who was doing the rebuilding, a gardener himself, lifted the soil into big heaps outside the garden area with his backhoe. He scraped up every last teaspoon of rich earth. And after he’d made the new drainfield, we worked out where we’d put new beds, all to be framed with recycled cedar boards from old decks and various projects, the paths over the drainlines so if there was trouble, we’d know exactly where to find it. Then Doug scooped the soil back with the bucket of his backhoe, smoothing it into long barrows in the areas between the lines. It took some weeks to build those boxes, to replant what was waiting, and to try to establish the garden again. One day, easily a month after we’d replanted everything we’d taken out, I dug a hole for a new rose.  And here’s what my shovel brought up from under the earth: 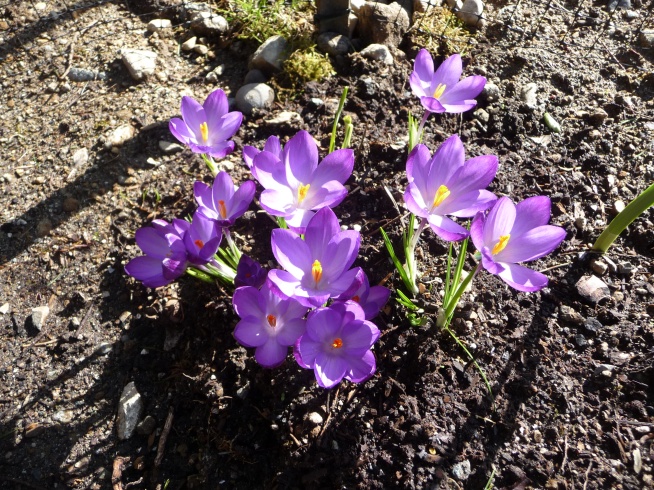 There’s an amazing scene in Book Eleven of the Odyssey when Odysseus meets his old comrade Akhilleus.

Let me hear no smooth talk
of death from you, Odysseus, light of councils.
Better, I say, to break sod as a farm hand
for some poor country man, on iron rations,
than lord it over all the exhausted dead.

Yes, absolutely. I wouldn’t change my life on earth for anything. Not yet. But I have some sense of entering the great system of rivers surrounding the underworld: the Acheron (river of woe), the Cocytus (river of lamentation), the Phlegethon (river of fire), the Styx (river of unbreakable oath by which the gods took vows), and the Lethe (river of forgetfulness). I’ve always loved rivers. And having dreamed of my mother and others I’ve loved and lost, I understand what Odysseus meant when he said, “But my heart longed, after this, to see the dead elsewhere.”

2 thoughts on “a great loveliness of ghosts”