A few years ago, my son Forrest Pass, a historian at the Canadian Museum of History, told me that he was in the process of looking at (with hope of acquiring for the Museum) a remarkable diary. William Scouse and his three compatriots had been among those who’d discovered gold in the Klondike. Scouse had kept a diary, a practical account of his daily activities, arriving at Dyea (near Skagway, at the foot of Chilkoot Pass) in 1896, traveling overland — remember those photographs from social studies classes in grade school of the ascent of the Chilkoot and White Passes? Not a gentle Sunday walk —  and by boat (which they built at Bennett Lake for the passage to the Yukon River), finally arriving at Eldorado Creek that fall.

It’s country I’ve traveled through, though not on foot nor by homemade boat. In 2011, John and I left the wonderful Whitehorse Poetry Festival, where John had been invited to read, to go by bus and train to Skagway, Alaska. The bus took us through Carcross

to Fraser where we boarded the White Pass train to follow the narrow-gauge railroad to Skagway. This railroad was built in 1898, during the Klondike Gold Rush, and it’s an International Historic Civil Engineering Landmark, a designation shared with the Panama Canal, the Eiffel Tower and the Statue of Liberty. That journey was spectacular. 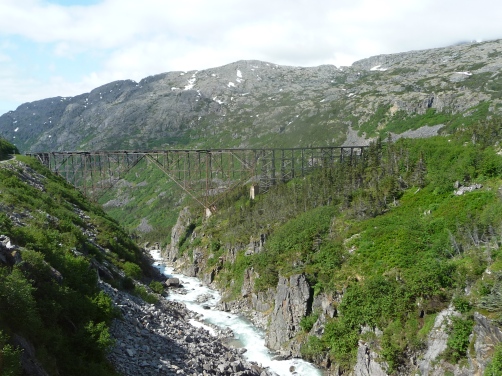 We took the train in late June but imagine the Pass in winter, imagine it in snow. There were remnants of ramshackle shelters along the way and old bits of iron, and I was haunted by the memory of this photograph, the one we studied in school:

William Scouse walked the Chilkoot Pass — it runs parallel to White Pass. He walked it before the stampeders of 1898 but the route was the same. Difficult and treacherous. And everything necessary for the journey had to be carried a distance of 53 kilometres to Bennett Lake (where of course boats had to be built!), often over many trips.

Forrest has written a fascinating article, “Unearthing Eldorado”,  about the diary of William Scouse, wonderfully illustrated with period photographs, and it appears in the December-January issue of Canada’s History (formerly the Beaver). I loved reading it because it took me back to my (admitedly comfortable) explorations in that country more than a century later, and because, well, it’s lovely to read something by my own son who has always shared my love for history but who has a much more meticulous mind. I’m so proud of him.

Our trip took us by rental car to Dawson City, a place dense with history. We spent four nights there, walking its streets under a sun that almost never set — it was early July and I remember meandering back to our B&B from a late dinner and marveling at the light. We could hear the river and if we could listened hard, we could hear voices too. Maybe one of them was William Scouse alerting his partners to nuggets in the paydirt. We went to Eldorado Creek and saw the remnants of old operations. And it was hard not to dream in the endless light, on the streets of Dawson City: