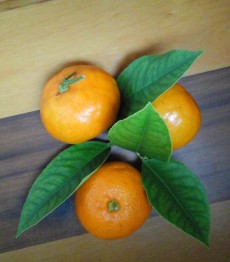 Probably the best way to eat an orange is to pick it dead-ripe from the tree, bite into it once to start the peeling, and after peeling eat a section at a time.

Some children like to stick a hollow pencil of sugarcandy through a little hole into the heart of an orange and suck at it. I never did.

Under the high-glassed Galeria Vittorio Emanuele in Milan before the bombs fell, the headwaiters of the two fine restaurants would peel an orange at your table with breath-taking skill and speed, slice it thin enough to see through, and serve it to you doused to your taste with powdered sugar and any of a hundred liquors.

—from An Alphabet for Gourmets by MFK Fisher

Because the last two months have been filled with uncertainty — political, and also personal, as I undergo a seemingly endless battery of tests for an ongoing health situation (what else to call it?) — I’ve been thinking about other Octobers, other Novembers. There was the October we went to Prague and Brno and Vienna, under grey skies, and wandered the beautiful streets, stopping for glasses of sparkling wine or tiny cups of espresso. And the November in Venice, also under grey skies, when we walked along the canals and looked at Madonnas in one dark chiesa after another. The Octobers and Novembers we stayed home and didn’t have a single doctor appointment. The Octobers we went to meet new babies (and to be honest, we did this in early October this year too, before the scary tests began…).

Because the mandarin oranges are now in the grocery stores, I’m reminded of Paris, walking with my friend Anik (pushing her little son L. in a stroller) along a street near the Bastille and smelling — honestly smelling! — oranges, which had just arrived from Sicily. We followed our noses. A woman was selling bright clementines from a table, along with roses and carnations, but we only bought the clementines, a bag of them, chosen from the pile. There’s almost nothing as lovely as a fresh clementine, quickly peeled, and eaten one section at a time. And then another, another, until the bag is finished, and you feel like you’ve eaten sunlight for the warmth inside you.

10 thoughts on “the best way to eat an orange, after MFK Fisher”