One of my favourite drives on earth, through the tunnels, along the Fraser River,  the Ponderosa beginning around Boston Bar and fringing the highway like Japanese wood engravings. The smells, every element in its place — the river and a few raindrops, the soft air (and every house on the Siska Reserve with a screened shed for drying salmon), ochre and flinty soil, the smoke from a distant fire on the west side of the river, brought back to life by the wind. Here’s the Alexandra Lodge, more derelict every year (and for information on the Lodge and its storied history, here’s a wonderful site: http://www.michaelkluckner.com/bciw6alexandralodge.html ) : 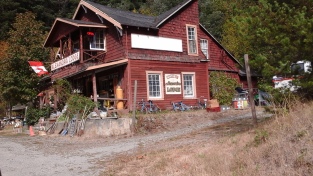 And here’s the Thompson River, losing itself in the grey Fraser:

It was the Two Rivers Farmers Market in Lytton so we stopped, bought seed garlic to plant when we get home (an Uzbek variety), listened to Willard play old rock numbers on a guitar while the wind blew and the sellers were friendly and you could see why the market was named best small farmers market in B.C. last year. Then we took Highway 12 from Lytton to Lillooet, driving along the river where rabbit brush grew dense and yellow along the roadside, and finding ourselves in the least charming motel we’ve ever stayed at in all our years, though it did look out on a river and even had a single metal chair on its tiny balcony  — though not a single picture on the wall or any kind of decorative element which made me glad we paid a little extra for one of the “view” rooms because we slept with the sliding door open all night to the wind and the sound of a single train below us.