The other night we were lucky enough to get tickets to Flicker, a hauntingly beautiful performance by the Dancers of Damelahamid at the Vancouver East Cultural Centre. “Just as light shimmers, Flicker represents the moments through which one can cross space and time,” promised the promotional material and it was true. For 70 minutes, we entered the world of the Gitxsan, where the sound of northern flickers calling and drumming merged with the Tsimshian stories enacted on the stage. The Dancers take their name from the ancient city state of Dimlahamid (as it was known to the Gitxsan) or Dzilke (its Wet’suwet’en name), the locus of a sophisticated culture (both material and spiritual) that was abandoned after a series of ecological disasters brought about by mistreatment of mountain goats and a mocking of the sky itself.

Those mountain goats were present in Flicker —  two white-robed beings with black horns and rattles. They provide warmth and solace for the central figure of the performance, a young man on a hero’s quest. A series of changing video projections took us through the seasons, the passage of the day from sunrise to dusk and a dark sky filled with stars. Birdsong and wind, a series of animistic dances, the voice of a Gitxsan storyteller providing a rhythmic text almost beyond understanding — almost, because there were moments I felt I knew what the story was, where it was leading us. There were four dancers, four seasons, four directions, the matrix at the heart of the creation.

When the hero appeared in the mask of the flicker towards the end of the performance,  I thought of the masks I’ve seen in collections over the years. Flicker feathers adorn so many of them; the birds were believed to be emissaries between the realms of heaven and earth. On Wednesday evening, watching, I knew that to be true. The physical place, Dimlahamid or Temlaham as it’s sometimes transcribed, might have vanished in linear time but its spirit is alive and flourishing in the work of these young dancers. 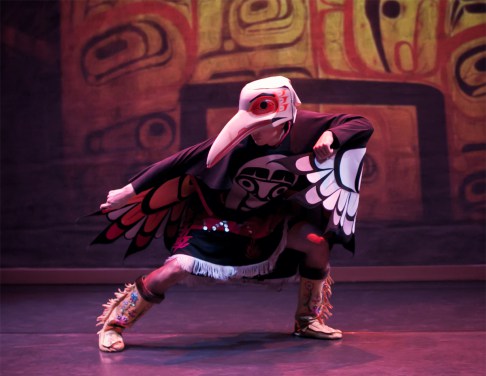