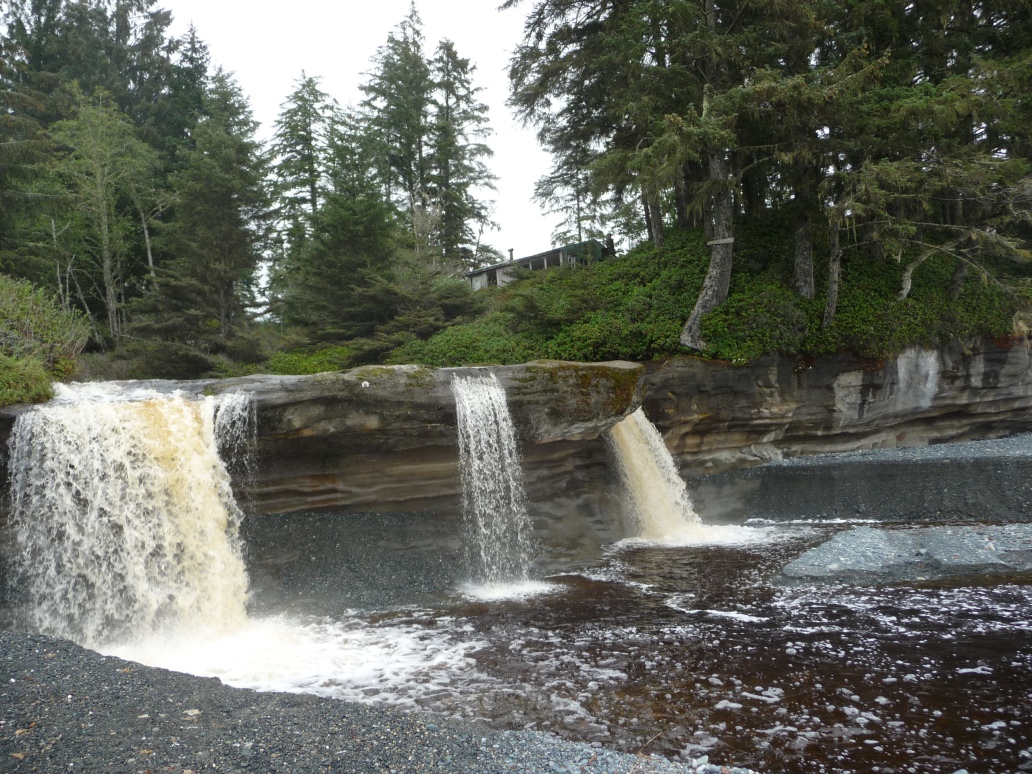 She listened to the creek falling to the beach. She pulled off her sweater, threw it to the rocks. Her corduroy trousers. She left on her canvas sneakers. And darted under the shelf where the fossils slept in the wall of stone. With a little shriek, she stepped forward into the shower of cold water.

She turned so every part of her body met the water, thrusting her chest forward, her breasts stinging at the contact, her legs shuddering. The pool the water tumbled into came half-way up her calves, icy as glaciers. Freshets ran down her back and she could not feel her knees, her elbows.

And now it was dark, moonlight just beginning to glitter on the ocean. Gasping and coughing, she groped with icy hands for her clothing, wrapping her sweater around her shoulders and not bothering to put on her pants. Sneakers squelching, she climbed the bank and found her way back up to the cabin where her candle guttered in the night air. She could not stop shaking. Rubbing her body briskly with a towel and wrapping another around her dripping hair, she realized she had not felt so alive in months.

Any moment now, Winter Wren will be arriving from the printer. It’s the first offering from Fish Gotta Swim Editions and to say I’m excited and nervous about the whole enterprise is an understatement of enormous proportions. It’s a novella about a place — the cabin and the beach in the photograph above the extract from the book. And it’s about a character, Grace Oakden, who appears in an earlier book, The Age of Water Lilies. I visited a book club to talk about that novel and someone asked, What happened to Grace? I had no answer but it got me thinking. And wondering. Winter Wren is the result. In it is buried a meditation on the 19th c. photographers and artifact collectors (Charles Newcombe, et. al.) who plundered and celebrated and recorded the west coast. The issue is complicated and this novella understands that.

On my study wall is a framed series of nine photographs, illustrating the book’s mantra: Bring me the view at dusk. Nine panels for nine window frames. It was given me by my daughter for my 60th birthday.Every morning I study it while I’m waiting for my computer to boot up and every morning I hear the surf, the noisy creek falling over its shelf of sandstone, smell the kelp. When I wrote the book, I had a hard time leaving its world each day to return to the dailiness of my present life, a dailiness I love and that anchors me in a sturdy durable way. But some days I wonder what would have happened if I’d actually left a note on the door of the cabin you can see above the creek, asking if I could rent the place. That was 1974. All these years later, Winter Wren is what happened.