I’ve been hard at work on an essay about my father’s family and the discoveries I made on a recent trip to Alberta. It’s a sad process, in a way. I think of them in their bleak house in Drumheller with its legacy of death and illness — the Spanish flu, diphtheria. The graves in the nearby cemetery, the marked ones and the unmarked. In the photographs I’ve been studying, there are blurry moments when I suspect I’m seeing ghosts. A hat on a chair. A dog watching an empty road, as though in anticipation. But those ghosts are also my ghosts so it’s work I need to do.

This morning I walked out to the garden to pick some kale for my morning smoothie and heard robin song. It was coming from the huge crabapple tree, given us 35 years ago by John’s mother; it’s now in full bloom. It’s so beautiful that you don’t even notice that the top branches were broken last fall by a bear. If you’re not familiar with this tree, you see only the deep pink blossoms, alive with bees and robins, and you don’t know that the fruit is small and scabby. And you won’t know that Vera Grafton once climbed its lower branches to gather fruit for jelly. That was the visit when she told me that her father had courted her mother by canoe, across Georgia Strait. Her mother lived in Nanaimo and her father was a member of the Shishalth Nation. How many years ago was that? Vera was in her 80s, I believe, when she picked the crabapples; and that was in 1997 or 1998. So think back, back, to the early days of the 20th century.

Coming back from the garden, I saw one robin fly to the nest under the eaves by the side porch and another quickly settle itself on the nest. This is the tree where they wait for the exchange to take place: 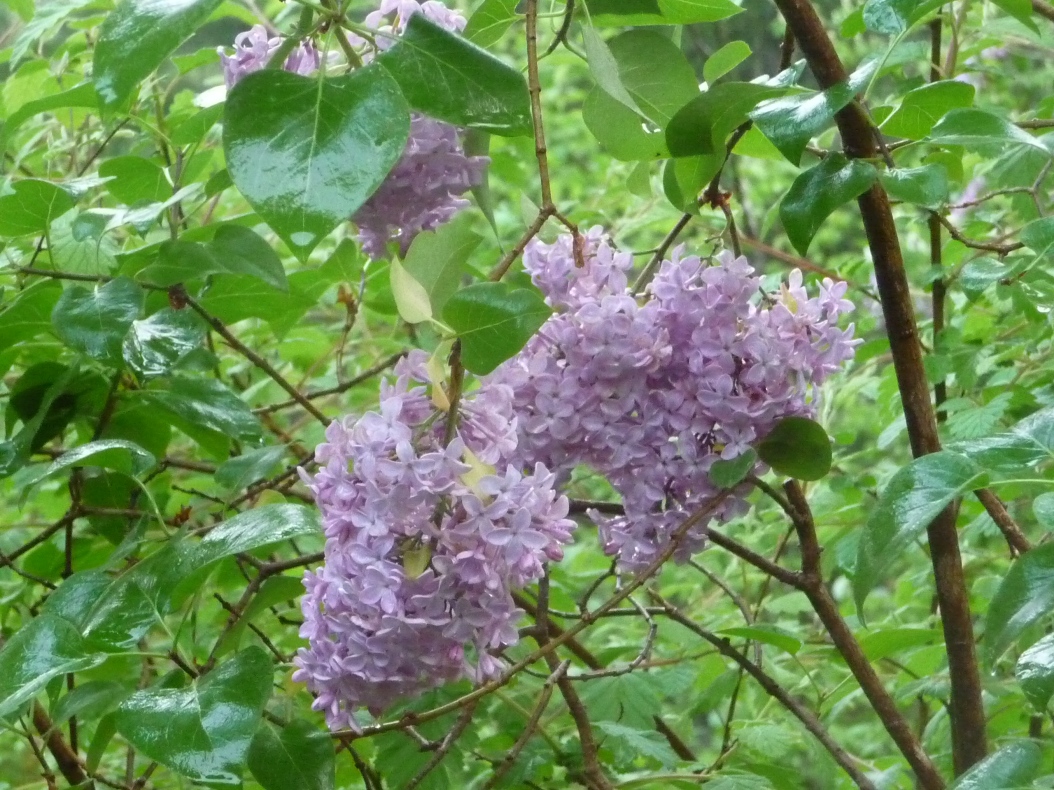 This nest site is not the best place from our perspective. The side porch is where the woodbox is and on weekends like this one — wet and cool — we still use our woodstove. When we left for Alberta, there was nest building in an elbow of grapevine on the south side of the house. Dry grass, moss, lichens, small twigs. Then returning last week, I looked up as I was bringing in stuff from the car and there was a almost-completed nest under the eaves by the porch. No sign of the builders but next morning one of them at least was back at work. And we’re bringing wood in the front door, enough for one fire at a time. But watching the robins is worth a little inconvenience. Some years three clutches of young have fledged from this location. I often wonder if each year’s parents are the original parents or else subsequent generations who return and return and return. The song returns, the blossoms return, and that bear will return (alas).

We have pleasure to look forward to over the next few weeks. The sound of chicks, then the occasional glimpse of them — or their open beaks! — as the parents work to keep them fed. The diligence of the parents as they swoop in and out with worms and other delicacies. And if we’re lucky, the sight of the young leaving the nest, flapping ungracefully on their first flight, often careening briefly through the air and landing in the lilacs. The parents scold and encourage. Some mornings we’ll see the family entire in the blue air as the young literally exercise their wings and learn to feed themselves.

Of course by now you will know that I am talking about my own family == three children raised in our homemade house, nurtured and loved, and coaxed easily from the nest with every hope for their long survival. Oh, and their return! “So there is also an alas in this song of tenderness. If we return to the old home as to a nest, it is because memories are dreams, because the home of other days has become a great image of lost intimacy.” — from Mnemonic: A Book of Trees, with thanks to Gaston Bachelard.

There are ghosts, and ghosts. The blurry moments in the old photographs of my grandparents’ home in Drumheller as a funeral is recorded or a young boy — my father — rides his tricycle over the hard earth. The scratchy signature of my grandmother’s first husband on a petition to Ottawa, begging to be allowed to stay in the shack he’d built on land he didn’t own. It’s all mine, if I can only record it and commemorate it in all its difficult details.