Canada is a huge country. When I was a child, my family drove across it, from Victoria to Halifax, and then back again two years later. In every province we travelled through, I lost my heart to small towns, imagining living there, wondering why we had to always live in the same places: Victoria, Matsqui, Halifax. What about Golden? Or Carberry? Or Annapolis Royal? When we lived on the west coast, we drove to Edmonton many summers to visit my father’s mother. While his father was alive, we visited both grandparents, but my grandfather died when I was two or three so I don’t remember much about those trips. I do remember sleeping in a small house with a metal roof behind the slightly larger house where my grandparents lived in Beverly, not far from the North Saskatchewan River. I remember hail on that roof and running with my brothers to the safety of the larger house where our parents were visiting with our grandparents and assorted aunts and uncles. I remember the heat of those summers and the great body of the river as it made its way from its home glacier in the Rockies to Saskatchewan.

And now my son Brendan lives in Edmonton with his wife Cristen and their daughter Kelly. Cristen’s father grew up in Edmonton so there are family connections on both sides. It’s not why they chose Edmonton — their decision had more to do with Brendan’s work (he’s a mathematician and he teaches at the University of Alberta) — but there’s something about the way places draw us, I think.  Over time they draw us. I hadn’t thought about Edmonton in years until my son moved there, bought a house with his wife, and began a family. Their family is already rooted, in a way. They are already familiar with winter, for example, and the sound of magpies. Their street is thick with elm leaves right now and Kelly will know the pleasures of walking through dry leaves in October before the snow comes.

In 1946, my grandfather bought a house from Jacob Prins. Here’s the bill of sale:

I know, it’s hard to read. But for 200 dollars in February, 1946, my grandfather John Kishkan bought a house located on the Humberstone Farm with the understanding that the house would be moved on or before July 1st. My grandfather paid in cash. I think this was the little house we slept in. In the papers I found after my father’s death in 2009, there was a box of receipts and so forth for house-building materials, all dated late 1946 and 1947. I think my grandparents must’ve lived in the little house moved from the Humberstone Farm to their lot on 111th Avenue in Beverly and then they built a larger house on the same lot. Nothing grand. This is the house (photo taken by my auntie Ann’s great-granddaughter a few years ago):

I am wondering about the stories contained in these papers and this house. My grandparents moved from Drumheller where they had a small farm (I believe it was land taken out by my grandmother’s first husband Josef Yopek in 1912) to Beverly. Did they sell the farm? Did one of my grandmother’s grown children keep it? (She had 8 children from her first marriage and they were mostly adults by the time my father was born in 1926. My father lived with one of the grown sisters in Edmonton for a time and perhaps as my grandparents aged, it was felt that they too should come to be closer to their family. Although the children were not biologically related to my grandfather and he certainly didn’t adopt them, I note that they are listed as his daughters and sons in his obituary.)

And I wonder why my grandfather bought a house from Jacob Prins. There’s so much I don’t know about my grandfather’s early life but when I read about the Humberstone Farm, which Jacob Prins bought sometime after 1927, I discover that it was not only a farm but also a coal mining operation. The Humberstone family bought a 1/2 section of River Lot 42, east of 34th Street and south of 118th Avenue, nestled in a broad bend of the North Saskatchewan River. The farm took up part of the land and as well as a coal mine, the Humberstones also ran a boarding house for coal miners. My grandfather’s history before he met my grandmother is sketchy. I know he was a miner, I know he worked in Kananaskis and Phoenix, B.C. and Franklin Furnace, New Jersey. But was there also an association with the Humberstone Coal Company?

So many questions — and no real possibility of answers. Anyone I could ask is now dead.

We walked a little through the river valley this past weekend while we were in Edmonton and I thought how beautiful the landscape was with the golden aspens and the mountain ashes laden with clusters of red berries and the noisy magpies gliding in and out of the trees. It’s not my place but I have ties to it, over time, and those ties are strengthening all the time. I was a child over on the other bank of the river, walking with my mother in the dust of summer, and now I watch another young family take pleasure in the seasons. 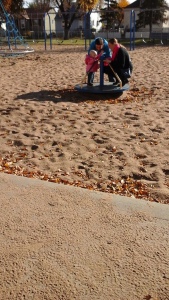 A little Seferis to put things in perspective:

If pain is human we are not human beings merely to suffer pain;
that’s why I think so much these days about the great river,
this meaning that moves forward among herbs and greenery
and beasts that graze and drink, men who sow and harvest,
great tombs even and small habitations of the dead.