“There were little tables along the dusty paths set out in an absent-minded way; couples were sitting there quietly in the dark, talking in low voices, over glasses of water. The glass of water . . . everywhere I saw the glass of water. It became obsessional. I began to think of water as a new thing, a new vital element of life. Earth, air, fire, water. Right now water had become the cardinal element. Seeing lovers sitting there in the dark drinking water, sitting there in peace and quiet and talking in low tones, gave me a wonderful feeling about the Greek character. The dust, the heat, the poverty, the bareness, the containedness of the people, and the water everywhere in little tumblers standing between the quiet peaceful couples, gave me the feeling there something holy about the place . . .”

–Henry Miller, from The Colossus of Maroussi 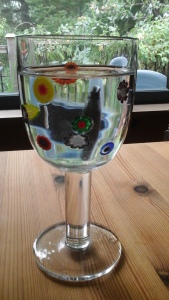