By noon, the lettuces are too limp with heat to pick. So I’ve been going out in the morning to gather a big colander of salad to have later in the day. It’s too hot for much more than greens at lunch and dinner, though yesterday’s sockeye, barbequed in the early afternoon when the patio was cool and eaten in the evening with dill and chives (and salad) is one option. So today’s picking — red lettuce (the butter lettuces went bitter in the heat and are now in the compost), arugula, and the volunteer catalogna lettuces which seem to thrive in summer; and then I wondered if the garlic was ready to pick too, three weeks early. And it is.

The raspberries are lovely right now, juciy and perfect with cream, after sulking for two years when we had to uproot them to rebuild the garden after the septic field had to be repaired. 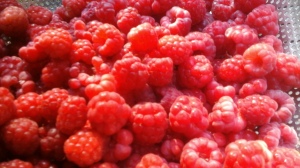 So we’re ready should a god arrived, unannounced:

She drew a table of ambrosia near him

and stirred a cup of ruby-coloured nectar —

food and drink for the luminous Wayfinder,

who took both at his leisure…

Later: it turns out the gods were here all along. 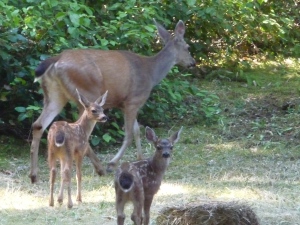