I first read about cassoulet when I was 21, living for a winter in a beautiful house with Elizabeth David’s books on the kitchen shelves. Her descriptions of the dish in (I think it was) French Country Cooking were part of the reason I became so interested in food. A story of variation, of long slow simmering, of ingredients so passionately sourced and prepared. We had a lovely version the other evening and when I praised it, the chef (and owner) of Au Lard et au Cochon went into his pantry and brought out a big cloth sack from Castelnaudary to show me the dried beans he uses. They’re slightly longer than the ones I use in Canada, slightly more elegant. His cassoulet was fabulous.

Today we returned to the medieval city to explore some more and we had lunch at the same place as yesterday, the Maison du Cassoulet. We had other food yesterday but today we both had cassoulet. It was very good, slightly thicker, with a crust — no crust at Au Lard et au Cochon. And the Toulouse sausage today wasn’t quite as flavourful. Our host the other evening said his friend makes the sausage he uses. And there were also little morsels of pork belly (I think) which gave the dish such depth. Today we shared a half-litre of local rose which was the kind of wine you could get used to drinking as often as possible.

I made cassoulet this winter with what I had on hand (or in the freezer): confit of duck leg and homemade sausages from friend Jeffrey; double-smoked bacon; dried beans and garlic from the summer’s garden. It was good but now I have a few other ideas, or at least I will once I decode this flow chart… 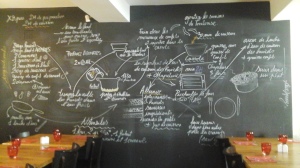 Hopefully Jeffrey will share his bounty again. And tomorrow we’re going to Toulouse where I understand there’s a cassoulet brotherhood whose members wear hats shaped like the cassole, or earthenware vessel cassoulet is traditionally served in. Of course we’ll try at least one version there too. And maybe buy a cassole to bring home. All those years ago, reading Elizabeth David in North Saanich, I had no idea I’d be lucky enough to try cassoulet on its own terroir.