I’ve felt restless lately, caught in a mesh of memories and regrets. Not regret for what I have — I love everything about the life I am living, the participants in that life, its context. But perhaps I mean I regret not having gone a little further down a road I tentatively explored in the mid-1970s. In those years, I was trying to figure out how to be a writer. I thought it meant choosing a place and giving up everything else to be there. In a way I’ve done that. But I wonder about the other places, the ones I spent time in and loved. The ones that provided a template that is a transparency through which I still see the world, understand its complexities, and through which I still dream.

After last week’s lovely interlude at the Pacific Rim, I am reminded of how much time I spent as a young woman on the far beaches of Vancouver Island’s western edge. I was unhappy in those years. Poetry was my solace and my salvation. Finding out that I could write saved my life: I truly believe this. And the grammar of that early work was rooted in the flora, fauna, and geology of those isolated shores. Leechtown, China Beach, Loss Creek. I’ve written a novella, Winter Wren, still searching for a home, in which I locate my character in the house I longed to live in above Sandcut Creek. I’ve given her the life I wanted then. I was 2o. In my novella, Grace is 59, the age I am now. And here’s the house, above the waterfall where I used to shower after swimming when I camped on this beach in 1975: 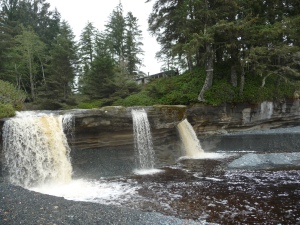 I’ve been thinking about this sense of displacement — my own, and history’s. This afternoon I watched Paul Manly’s beautiful documentary, Sombrio. https://www.youtube.com/watch?feature=player_embedded&v=pN9zPECVNBA  (I wish I could figure how to embed these because the trailer has such a beautiful image of the beach itself.) Sombrio Beach is one of the western beaches I knew in the 1970s. It’s northwest of Jordan River, on the road to Port Renfrew, which is the southern end of the West Coast Trail. When I went to Sombrio, there was a rough road which led to a even rougher trail. You climbed down to the beach itself and it was wonderful. People lived there in houses they’d built of scavenged lumber and I know now that some of them surfed. I never noticed that then. I noticed the scent of wood-smoke, the way the houses were low and organic, and how some of the residents sat in front of beach fires and said, Come over and warm up! I know from Paul Manlys’s film that people have lived on that beach for hundreds, possibly thousands of years. It was a summer village site of the Huu-ay-aht First Nations. Later, Chinese and North American gold miners staked claims on Sombrio River. In the late 1960s and early 1970s, people migrated there to live simply and quietly, to fish for halibut, gather mussels, and raise families. One family, profiled in Manly’s film, raised 11 children in a handbuilt house without any modern conveniences. The kids were home-schooled, wise in the ways of the natural world, impossibly beautiful with their open faces and wind-tangled hair. They learned to surf as soon as they could walk and several of them went on to become world-class surfers. In a review of the film in the Globe and Mail, Tom Hawthorne describes the interior of the home: “A wood stove provided heat, warming the inhabitants as well as the jumble of wet suits dangling from the rafters like tattered black flags.” When I saw the wet suits, I thought of seal skins, pelts drying as the children spent time in one element, donning them again to enter the sea and ride the waves as though they were part of the water. Selkies. Children of a realm we dream of but seldom experience ourselves.

In 1997, the residents of Sombrio Beach were evicted so the provincial government could include the area in a park. Some of them moved further into the wilderness. The family so intimately portrayed in Manly’s film relocated to Port Renfrew. Tragedy has been visited upon them in unfathomable ways with four of the children dying and the father losing his life to cancer. When I read about this after watching the film, I was filled with sorrow. I imagined them leaving the home that had been cobbled together of driftwood and beach stones, goats and chickens and a garden lovingly tended, and beginning again.

How we fill our lives with stuff we could so easily live without. Looking at piles of dishes in the sink, I think, O, maybe it’s time to think about a dishwasher. Or I feel the chilly tiles under my feet on winter mornings and long for a system of hot pipes to warm the floors. I don’t have a cell phone but I’m wondering how long I can resist. A big television. A fancier car. What haunts me about Sombrio (and I rented it for 48 hours via Vimeo: it cost me 1.99. If you do the same, I’d love to know what you think…) is how people have lived so well with so little (by first world standards) and how authorities simply can’t stand it and move in to fix things. Would I give up what I have now, at the age of 59, to live in a driftwood house on the edge of the Pacific? Probably not. But I wish others could live there, riding the green waves on narrow boards, and opening their windows to the salt-laced wind.