This morning I was musing at my desk when I realized I was seeing quite a lot of activity on the part of a robin darting in and out of a grapevine on a corner of the house beyond my window. Robins have nested in that particular elbow of vine in the past but not this year nor last. The nest I was delighted to see on the beam over the patio was robbed just after eggs had been laid. It was poignant to peek in after realizing the female robin hadn’t been near it for a few days and to see one empty shell and another on the ground directly below it. Ravens can’t get to this particular area so I wondered what might have eaten the eggs. This was before the weasel got into our house and raced around, up my bookshelves, and down the hall. So was it the weasel who ate the eggs?

Watching the robin take moss and mud to the nest area this morning, I also heard her mate singing loudly from the nearby arbutus tree. A last gasp at summer — for this is about as late as I’ve seen robins building nests. I thought of John Clare (1793-1864) walking the lanes of England, noticing the nests of every kind of bird in hedges, on the ground, nestled in the boughs of trees. “Birds Nests” was the last poem he wrote (and there she is again, while I type this, taking a beakful of lichen and moss to the vine):

The nest isn’t finished yet. 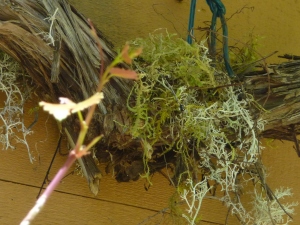 When I went out to try to take a photograph, the female glided out to the birdbath where she made nervous sounds: 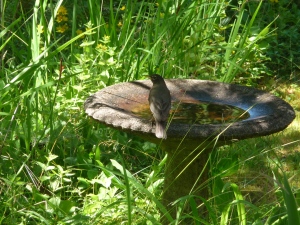 One year I was lucky enough to watch a robin shape her nest, using the wrist of one wing to smooth mud on the inside (there she is again!), and I thought how my own house has been shaped by my hands and by John’s. The rooms big enough for a family, small enough for dreaming, and even inspected by a weasel who raced from one end to the other, bright eyes taking everything in.

I’m going to go and fill the birdbath so she can cool off now that the sun is back. Her mate is singing again. I’m hoping for the best.