I thought we might have missed the wild lilies (Erythronium oregonum) at Francis Point. It’s become our habit to walk to see them over the Easter weekend and this Easter we were in Edmonton watching the magpies in the trees around Brendan and Cristen’s house. But we walked out this morning and were lucky to find a few lilies still in bloom.

It’s a beautiful place to walk. You make your way above the rocks where at low tide the gulls can be seen feeding on starfish (I know, I know: they’re called sea stars now but old habits die hard…) and will look up with their thoats ridiculously distended. Sometimes there are seals or even sea lions passing though it’s more usual to see a boat — a pleasure craft, a fishing boat, or else this: 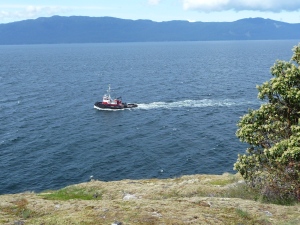 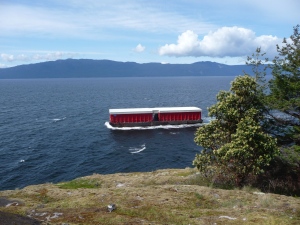 This is a view across Georgia Strait to Texada Island. We’ve always called it Georgia Strait though there’s a movement to include it in a wider area which supporters want to term the Salish Sea. When I asked Kevin Paul, a poet and linguist  from the WSÃ ,NEC Nation on Saanich peninsula (the same area where I spent my teen years), what he thought of the idea, he laughed. He said Salish was a controversial term to say the least and that the body of water I was referring to had different names for different times of the year, used by different Nations, and that it also depended on what you were doing at the time.  But some things don’t change. The wind, the flowering arbutus, the gulls, the constancy of the wild lilies, the way the heart opens to all these things on a bright April morning.