Yesterday we drove through a high pass (9.000 feet) in the Sangre de Cristo Mountains, to Cimarron, New Mexico for lunch. John read in a guide book about its storied past, the hotel which housed various outlaws (Jesse James, Billy the Kid, etc.) and where Buffalo Bill convinced Calamity Jane to join his show. It was very quiet there, the outlaws all long gone (though some have bedrooms named for them in the St. James Hotel, built in 1872). And the hotel is beautiful — and quiet, yes, with just a few people eating in the dining room and a few more in an adjacent room, would-be bartenders  taking notes while a man walked them through the state liquour laws. 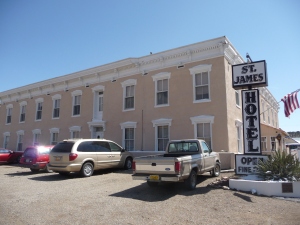 We left our little room in the Taos Inn this morning, driving through another high pass where my ears complained until we descended (but only a little) to Las Vegas, a town which feels a bit like time forgot it. It’s high desert here, and so beautiful. 6,424 feet above sea level…We found a room in the 1882 Plaza Hotel which hosted dentist Doc Holliday and his girlfriend Big Nose Kate, Jesse James, Billy the Kid, Wyatt Earp, Mysterious Dave Mather, Hoodoo Brown, and Handsome Harry the Dancehall Rustler in its day. 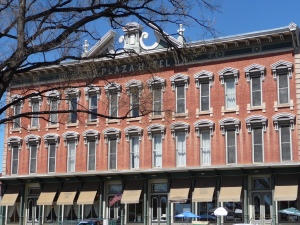 A friendly woman in a nearby shop wondered if I’d ever heard of the United World Colleges — which of course I have because son Forrest attended Lester Pearson College of the Pacific in the late 1990s… — because she said that the Armand Hammer United World College of the American West is in nearby Montezuma. So we drove out and although it’s not a day when one can tour the campus, the kind security guard let us drive up to take a photograph of the main building. 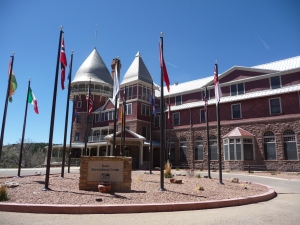 We ate our lunch on a patio overlooking Las Vegas’s spacious green plaza, overhung with huge cottonwoods. Who knew this place existed and that we would find it in time to enjoy the sun in the shade of its old buildings.