We’re waiting for the coho salmon to enter Haskins Creek. They have arrived as early as late November and as late as the period between Christmas and New Year. The water level in the creek is low and I think the fish are probably hanging around in Sakinaw Lake into which Haskins Creek empties. We walk over every few days and peer hopefully into the water but no fish yet. I think they are my favourite fish on earth (or in water), their clean burgundy and dark green bodies in the clear creek, the dark jacks darting among them. (Jacks are called grilse on the east coast. And I was delighted to learn that the spawned-out fish are called kelts.) I think of how far they’ve migrated from this small creek in their infancy and how they find it again as adults, every departure and return entailing a long swim through Sakinaw Lake, entering the sea or leaving it.

Waiting for them reminds me of the way patience is at the heart of so much of my life. It’s not an easy virtue  — if it is a virtue. My mother always insisted it was. This morning I was awake early and came down to work on the essay I have in progress: “Euclid’s Orchard.” It’s about language, genetics, mathematics with its attendant difficulties, love, and why we’ve abandoned our own orchard, leaving it to the bears and deer who kept breaking down the fences, eating the fruit before we could pick it, and now the elk who’ve also discovered it. It’s about patterns and how they both echo and transmutate, crossing the borders of one discipline or landscape and finding themselves at home in another. But I sat at my desk and didn’t know where to go next. If there’s a pathway from what I’ve written to what I need to write next, it’s hidden.

I worked on my current salmon quilt instead, my needle following the spiral I am stitching into a panel of indigo cotton printed with raindrops. Spirals lead me to think about labyrinths. There’s one in the parking lot of one of the churches in Sechelt and I’ve seen people walking slowly between the painted lines. I know that some use labyrinths as a way to leave the outside world and concentrate the mind. As I stitch, I feel the texture of cotton in my hands, as soft of a work-shirt, and I think of all the hopes I have for both the quilt I am making and the essay I’m writing. Not hopes for them as commodities or as a means to fame and fortune (ha!) but as distillations of everything I feel and know about the world. Of what I don’t know yet and hope to discover as I write and stitch, the beautiful textures revealing themselves slowly, in a way I might not even recognize if not for patience.

I believe the fish will come. The creek is waiting, and the cedars and ferns which will draw up nitrogen from the abundance in the spawned out bodies.

The woods were quiet and we almost missed the American dipper who was standing on this branch over a vernal pond, taking a break from its foraging for aquatic larvae. 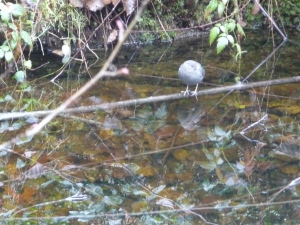 There were raindrops in the pond, only a few, so that you could see the ripples as they spread out over the surface, each ripple moving away from the centre into the unknown.