We left Sydney early in order to spend most of the day at Louisbourg. Yesterday it rained all day and so we were glad to have gone underground in Glace Bay. Today was wild and windy but the grey clouds tumbled overhead, mingling with clear blue, and didn’t release any water they might have held. We took the slow road to Louisbourg, the one that wound its way through Mira, Main a Dieu, and the loveliest fishing village imaginable: Little Lorraine. It wasn’t on our map (didn’t Melville say that the true places never are?). We drove off the slow road onto a gravel road above a few houses with mountains of lobster pots in their yards. While John took a few photographs, a couple of guys called out to him. They were friendly and when John said that they lived in a beautiful place, they agreed in the most forthright way. “Yes, boy, it’s nice alright.” 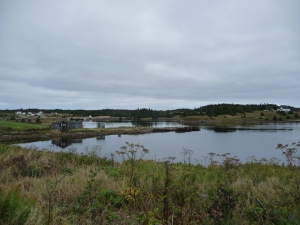 Some places hold themselves proudly in the world and I thought that Little Lorraine — founded in 1716, population 62 — was one of them. A place to inspire stories and music. I could imagine myself into one of the houses on the quiet bay, hidden behind lobster pots, where wildflowers swayed in the wind. I thought of Alastair McLeod’s No Great Mischief, its rugged characters, who wouldn’t have been out of place here.

Louisbourg is worth a post of its own and I’ll do that soon. It was absolutely magical with its reconstructed streets and buildings evoking the French colony of the early to mid 18th century.

Tomorrow we leave to drive back to Halifax to be ready for a flight to Newfoundland on Thursday morning.