It’s so different now, the road where my parents bought their first house in 1969 – they were in their forties but hadn’t been able to settle anywhere until then because of father’s military transfers. You got to our side of Mann Avenue by turning off Glanford. Then, the road ended at a small clearing by Colquitz Creek, a place where lovers parked on weekend nights and where I rode my horse when school finished on winter afternoons. There was another short section of Mann Avenue leading off Wilkinson Road. Now the two sections have been connected and the fields have been filled with townhouses and a subdivision and only those of us who were young in the 1960s remember the remnant orchard where the Mahon family had grown apples for cider and where the remaining son Bill, who was probably in his sixties, lived in the beautiful old house with his bulldog Winnie. Where a man who lived on Christmas Hill rented some of the orchard for his young cattle. Where I’d retreat sometimes when our house got too noisy and where I’d read under apple trees and where once a calf grazed around me as though I didn’t exist, so still was I in the soft grass. 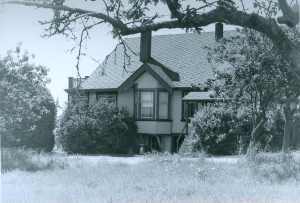 Some weekends, young men came to visit and when the garbage men collected on Monday morning, there was always the sound of crashing glass as they emptied Bill’s can into the trunk. Gin bottles, my mother would say as she pulled the curtain aside to watch. Thereafter, I always associated gin with young men coming for the weekend. I was only in the house once, when I knocked on the door to sell Christmas cards or some other (forgotten) item for a school fund-raiser. The house smelled old. Old in itself, inhabited by old residents: Bill and Winnie. I waited inside the vestibule, by the front door, while Bill searched for his wallet. He wore slippers, I remember, and he shuffled. When the young men came, you never saw a sign of life for the entire weekend. The blinds were pulled and Winnie was put out to pee in the yard by herself. She whined at the door but for the length of a weekend she was not primary in her owner’s mind.

Behind the Mahon house, but still on its property, was another even older house. Our neighbour Daisy Harknett said it was the oldest house in Saanich. Her son Carl rented it for a time, with his wife and young child. Occasionally I babysat for them, walking down the rough lane behind Bill’s grand house to the shabby wooden building behind while Winnie barked from the window. It was a little scary to be in the house, alone, or at least the only one awake, while a small child slept upstairs and the trees creaked outside in the wind. Walking back to my house past midnight was like walking into another century, the one I knew.

These photographs came from an online archive and show the houses at the turn of the 20th century. In the past I’ve asked archivists for information on the street where I lived as a teenager. Specifically I had questions about two houses which I thought had historical value – this was long after the Mahon houses had been torn down and tract houses erected in their lost orchard – but one archivist insisted the road hadn’t existed prior to the 1950s so the houses I was remembering as “old” couldn’t possibly have existed either. Yet my mother learned things from the Ferrie sisters who’d lived on the corner of Glanford and Vanalman. That they’d attended dances with other farm families from the area before WW2 and that they’d walked to dances at the Community Hall on West Saanich Road, built by the Quicks. They wore their rubber boots and carried their dancing shoes in a bag along the dark road to the bright hall and sometimes they took a shortcut through the Mahon’s orchard. Neither of them married but my mother said they had been beauties. I wish I’d paid more attention. My mother had a rose rooted for her by the older of the Ferrie sisters, a bright pink climber, and I wish I’d dug it up when my parents sold their house.

Everyone I knew on that street is gone now. My parents. Bill Mahon. The Footners – Mr. and Mrs. and their grown daughter Molly. Daisy Harknett, who grew wonderful pears and who gave me cuttings from her New Dawn rose, telling me her mother had always said that you needed some old wood and new wood to make a cutting take. Mine took, both of them, and I have large tangly New Dawn roses to thank her for all these years later.The neighbours on the other side died too and I was visiting my parents when the husband passed away. From my open window I heard his grown children cry as they stood in the back yard and planned what to do next.